For those who have been around long enough, it’s hard to believe one of Silicon Valley’s great comeback companies is Advanced Micro Devices.

AMD CEO Lisa Su has prevailed against a lot of skeptics in the past five years, thanks to the technical advantage her company has gained from its Zen and Zen 2 architectures, compared to offerings from archrival Intel. In the processor wars, AMD is back, and it’s holding its own in graphics against Nvidia. Next up will be the Zen 3 chips.

This competitive resurgence is why AMD’s stock has risen 13-fold in the past five years to a market value of $38.8 billion. This week, after the company posted strong third-quarter results — with AMD’s highest quarterly revenues since 2005 — Su told analysts: “we are right where we want to be on our long-term strategic plan.”

I spoke with Su after that call. She said AMD’s next-generation 7-nanometer Zen 2-based mobile processors are on schedule to ship in early 2020. Su claims that AMD’s latest Epyc processor with 64 cores has a performance advantage over Intel in the datacenter.

And while sales of chips for game consoles are soft right now, she expects they will bounce back in the second half of 2020 as AMD ramps up production for the next-generation Sony and Microsoft game consoles.

AMD has a historic opportunity with the competitiveness of its Ryzen, Radeon, and Epyc chip families, Su said. She claims AMD has gained client processor unit share against rival Intel for the eighth straight quarter. 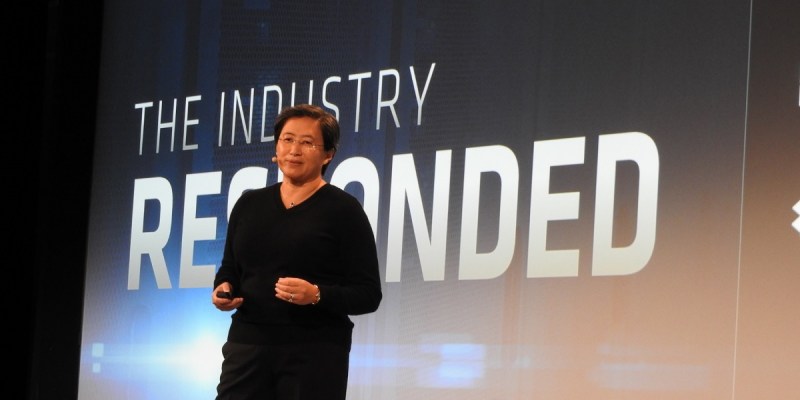 Above: AMD CEO Lisa Su at the company’s press and analyst day.

VentureBeat: It’s a great quarter. I don’t know if some people thought that you were going to do better than you did. The stock was down the last time I looked at it. Do you have a feel for what the expectation was here and why that may have happened?

Lisa Su: From our standpoint, it was a very strong quarter, both in Q3 and as we look forward. We had a very strong ramp in Q3 as we ramped our 7nm products, and we have another strong ramp here in Q4 as we continue that ramp. We feel very good about the progress.

VentureBeat: I did hear you mention that the game console business was soft. Does that seem like it’s at this cyclical level now, as the consoles are coming to the end of the last generation and the new generation hasn’t ramped yet?

Su: Yes. The console business is a great business for us. We’re very happy to be in the next-generation Sony and Microsoft consoles for 2020. We’re going through a product transition at the moment. Most of the energies have turned to the new consoles. But our expectation is that as this generation ramps down, we’ll have a strong ramp to the next generation, particularly as we go into the second half of 2020.

VentureBeat: Is that what it takes? A couple of quarters ahead of launch, you’re making a lot of those launch chips?

Su: You should expect that — again, the next-generation consoles, we’ll be planning in 2020. This year we’re just ramping down the current generation. [AMD expects game console chip shipments to be bigger in the second half of 2020, compared to the first half of 2020.]

VentureBeat: As far as the market share gains, they’re starting to look pretty impressive in terms of quarterly unit market share of x86 processors. The last quarter, I think, was more than 13% of all x86. You were down as low as 6% in 2015. Do we see some gradual, but real movement here?

Su: We’re pretty pleased with the market share gains. When we look at market share, you have to look at it over a period of time. In any given quarter you could see some anomalies. But yeah, I think we’ve made good progress over the last seven or eight quarters. Certainly on the PC side, and then on the server side we’re picking up as well. We have good progress overall in market share.

Su: To finish off this year, we’re planning on launching our Ryzen 9 3950X, as well as our Threadripper product portfolio. You’ll see that over the next few weeks in November. We’re very excited about those. High-end desktop leadership is a market that’s important for us, both for content creators and then on the mainstream side for the gamers and mainstream users. We’ll continue to push the desktop road map there.

We’re also pretty excited as we go into 2020. You’ll start to see our next-generation mobile products, as well, coming in early 2020. You’ll see 7nm mobile chips that have yet to come to market. That’s a pretty strong portfolio. We’re well underway with Zen 3 as a follow-on, as well, for 2020 — lots of product activity. Even though 2019 was a big product year, I think 2020 will be an even larger product year for us.

VentureBeat: Intel’s readying the new architecture that they talked about at the processor forum. They talked about their GPU landing in 2021. It looks like you have to plan for more competition soon.

Su: We always take our competition very seriously. It says something about the strength of the high-performance market. High-performance CPUs and GPUs are a great market to be in. We’re investing heavily in both the CPU and GPU road maps, as well as the software road map on top of that. We’ll continue those investments. 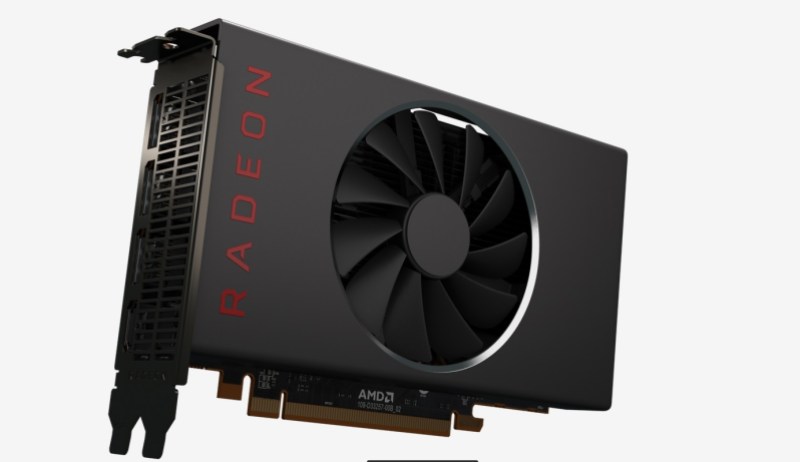 VentureBeat: As far as competing with Nvidia on the AI side, can we expect more from AMD on that front?

Su: As we look at the datacenter GPUs, we’re pretty excited about the market. If you look at virtualization, the overall market looks strong. We’ve had good traction with cloud gaming as one of the important use cases there. As you look at high-performance computing and AI, those are also really good use cases for us. We continue to move forward with our investments in hardware and software in those areas. We view that as a growth market for us over the next couple of years.

VentureBeat: The Samsung thing seems pretty exciting as an opportunity. Is that coming in as an IP opportunity or an actual chip opportunity? Is it more licensing, or are you actually supplying chips?

Su: The way to think about it, we want Radeon graphics to be everywhere. Everywhere means in the datacenter, in gaming, in PCs, in consoles, as well as in mobile. Samsung, as our partner in graphics — it’s both a licensing opportunity, as well as a development opportunity, where we’re jointly optimizing our Radeon graphics for lower-power applications. Again, it’s one of these areas where having the architecture span across all those product segments is a good thing for developers and a good thing for the architecture.

VentureBeat: Is there any opportunity to get Radeon produced in Samsung fabs, or is that not necessarily part of it?

Su: We think Samsung’s a great partner overall. Certainly, we’re familiar with their foundry work. We have done graphics there before, and we’ll look at opportunities as things go forward. I think the great part about it is there’s a rich foundry ecosystem, whether you’re talking about TSMC or Samsung. Our goal is to be at the leading edge of that foundry ecosystem.

VentureBeat: Is it a good thing that Global Foundries and TSMC have buried the hatchet?

Su: I don’t have any particular comment on that, other than what you read.

VentureBeat: I saw you at the Micron event. Did you pull anything interesting from there?

Su: It was a good event. [Micron CEO Sanjay Mehrotra and his company] are good partners of ours. We’ve done a lot of work in gaming and the datacenter markets. I was happy to support them. It was a good panel.

VentureBeat: I thought the comments were interesting, where they were talking about this idea of embedding computing in memory as something that will bear fruit in the future.

Su: I think everyone is looking at how we just add more intelligence into the component trees. We’ll see how that goes going forward.