Lisa Su, CEO of Advanced Micro Devices, is on a victory lap. At CES 2020, she said the company has gained market share on archrival Intel for the past eight quarters.

And Su said, “We’re just getting started.” In 2020, AMD is exploiting its advantages over Intel — a well-defined Zen 2 architecture and a cost-efficient 7-nanometer manufacturing process. The company will launch its new Ryzen 4000 mobile processors, and it will also release a monstrous 64-core AMD Threadripper processor soon.

In graphics, AMD is also challenging rival Nvidia with a new set of mainstream graphics chips. And Su promises that AMD will continue to move fast when it comes to designing the next-generation processor architecture, dubbed Zen 3.

I sat down with a group of reporters who interviewed Su after her press event on Monday. We all took turns asking questions. 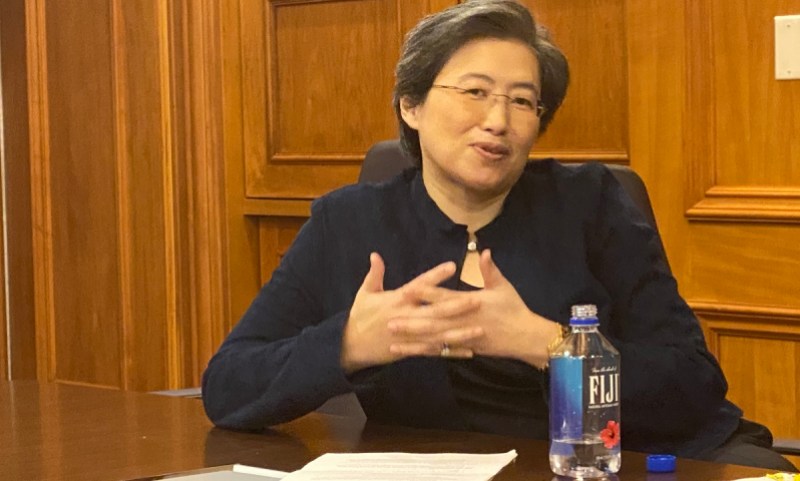 Question: You didn’t spill any beans about the consoles today, the console chips.

Question: Is it too early to start talking about desktop APUs? Is there a logical end of the line that they would be coming at?

Su: It’s a little bit early, yeah. When you look at our portfolio, we were very focused on desktop and server in 2019. We launched our first Navi-based chips with RDNA. Going into 2020, many of you have asked me, “Where is the Zen 2 notebook part?” We’re very excited about Renoir, the Ryzen 4000 series. You should expect a lot more from us in 2020. It’s only January. There’s a lot to go.

Question: Bringing that to desktop was relatively easy for AMD. Laptops, Intel has been circling the wagons for a while. What are some of the challenges there?

Su: We’ve always thought that this was going to be a very deliberate rollout of technology. Desktops and servers, we focused on the CPU and took advantage of the chiplet technology. That was the first incarnation. As you go into the notebook form factor, we have the integrated CPU plus GPU, as well as everything we’re doing around battery life. We think that the Ryzen 4000 series is going to be a very strong part for us.

If you take a look over the last eight quarters, we’ve gained share in the PC market every quarter. We believe that with the third generation of Ryzen mobile, we will take that to the next level in notebooks. We’re bullish on what we can do, and it’s not just what we can do. It’s what we can do with our OEMs. If you were to spend time with any of the OEMs, you can see that they’re doing a lot more design around the AMD ecosystem. You saw a couple of designs today with the Lenovo Slim 7, as well as the Asus and Dell machines. There will be a lot more machines coming out, and very nice form factors using the full power of the Ryzen 4000 series. 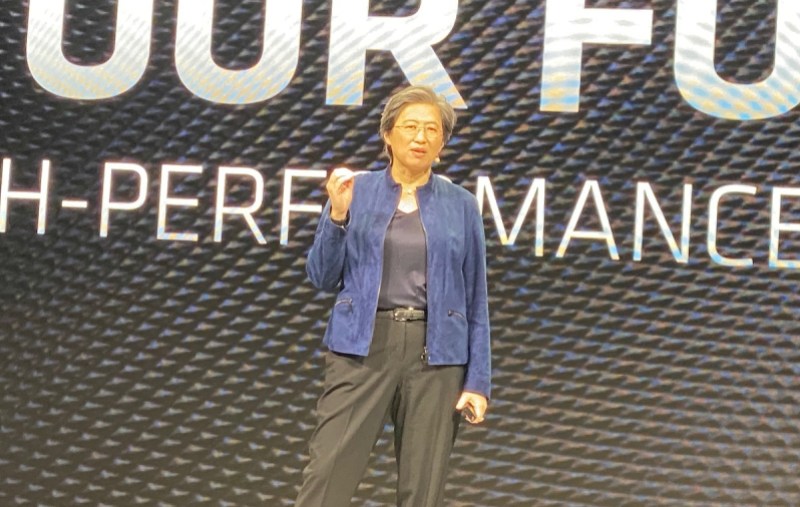 Question: Obviously when these chips were being designed — has the laptop market changed since those initial thoughts of planning to where we are today?

Su: I’d say that there has been more desire for — let’s call it more performance in the form factor. That’s where what we’re doing around gaming and content creation — slightly more TDP, a lot more horsepower. I think Fran said it very well. The idea of bringing desktop-class performance into the notebook form factor is one of the fastest-growing areas in the market. We didn’t spend a lot of time on commercial today, but we think commercial is also very important. The work we’ve done around security and manageability will be very important in the notebooks.

Question: Was it always the plan to be going toward the Vega, and not straight to Navi?

Su: It’s always about how we integrate the components at the right time. The Vega architecture is well-known, very well-optimized. It was always planned that this would be our integration of Zen 2 and Vega. You will see Navi in our APUs. That will be coming.

Above: A Threadripper-based gaming PC.

Question: Are you making headway in the commercial client business, where Intel is still strong?

Su: This is all about a journey. What we have seen — the PC market is a good market. If you look at how many PCs are sold, both desktops and notebooks, we’ve made a lot of progress in the market. There are a lot more products out with AMD inside, whether you look at large retailers as well as many of the commercial manufacturers. They’re starting to incorporate AMD. I’m very optimistic about what we can do.

Question: Do you think you have to compete with Intel on foldables and other upcoming form factors they’re pushing, with lower-power parts?

Su: What you’ll see is that we’ll continue to push the envelope on form factor. We’re working closely with Microsoft on some of the features and functions that are required to enable those types of form factors. You can see with some of the work we did with Surface, very sleek designs. You’ll see more of that going forward.

We know what we’re good at. We’re good at ensuring we have differentiated performance. That’s our focus. Working together with the OEMs, they’ll put those feature sets into differentiated designs. That’s important for us, to get to unique designs using AMD silicon.

Question: Intel gives a lot of MDF to its OEM partners to use their hardware while having nice designs. AMD is great from a marketing perspective, but how can you compete against everything that’s set up?

Su: This is about bringing great technology to market, but also having an ecosystem behind it. What we’ve learned is that success begets success. When we moved from the first generation of Ryzen mobile to the second generation of Ryzen mobile, you saw significantly more designs. We brought more than 50 designs last year. OEMs are starting to understand the capability of our technology. We’ve been very consistent with our road maps.

You can imagine — when we say there will be more than 100 notebooks in 2020, that’s a wider set of designs from the OEMs. Yes, there’s MDF involved, and there’s this whole retail marketing thing, but I actually think our brand is doing pretty well. We’ll continue to invest in the brand and in the ecosystem that will promote AMD. 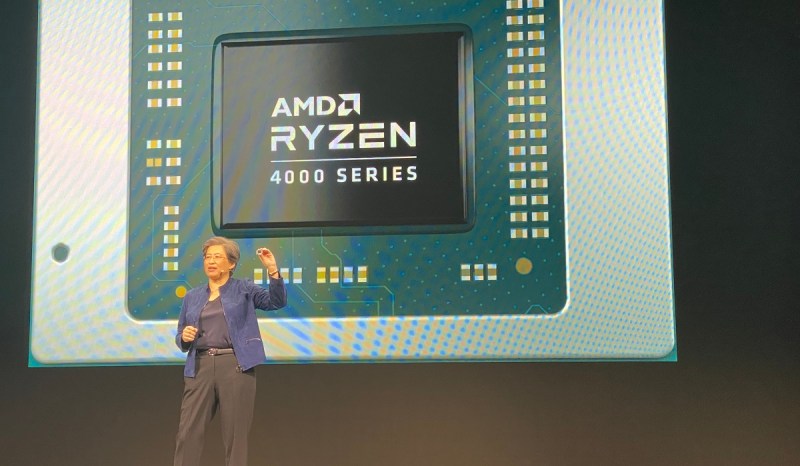 Question: Have you seen some people study that and get measurements of how things like Threadripper are changing the face of your brand?

Su: We have seen it. It’s not as definitive as, “Because of Threadripper we have X amount of market presence.” But I think what you can say is that because of Ryzen — and that’s Ryzen across desktop and notebook, as well as Threadripper — there’s a lot more recognition of AMD. As you see more form factors, again, success begets success.

Su: This is a big foray into laptops, yes. We’re putting a lot of work behind it. We’ve had lead positions in the laptop form factor before. They’ve typically been at the lower end. What you’ll see is a broader range of technology. Frankly, it’s because the products are really good. We believe that the Ryzen 4000 series is the best notebook processor available today.