The second-generation Vega-based graphics chip uses a 7-nanometer manufacturing process to get a 27 percent to 62 percent boost on graphics-related benchmarks, Su said.

It has one terabyte per second memory bandwidth, 25 percent faster performance at the same power, and 60 compute units that that operate up to 1.8 gigahertz.

Above: The AMD Radeon VII.

She made the remarks in a keynote speech at CES 2019, the big tech trade show in Las Vegas this week. It was a historic moment for the 50-year-old AMD.

Su threw out some impressive numbers. The world has about 1.5 billion PCs, and they’re used for heavy-duty creation, analysis, and decision making. She said that by 2025, the number of connected devices will grow to 35 billion, and that will in turn cause a 10X growth of data to 175 zettabytes, versus 20 zettabytes in 2016. Consumers will purchase 160 million laptops this year, and the fastest-growing category is ultrathin laptops.

It took about five years to design AMD’s Zen core, which can generate 52 percent better performance per clock cycle than its predecessor. And AMD has introduced 10 different families of chips based on the Zen architecture since 2017. Those PCs can do things like wake up with voice commands, last 12 hours doing productivity work, and enable gaming on laptops.

Su said the company’s Threadripper processor with up to 32 cores is being used by content creators to do motion capture and storytelling in the movies at places like Fox Labs and director James Cameron’s film studio.

Su said a record number of Zen-based laptops are coming this year from the biggest computer makers in the industry, including Acer and Lenovo.

Su said more than 400 million gamers play on Radeon graphics on the PC, the Xbox One, the PlayStation 4, and the cloud.

“Why is gaming so popular,” she asked. “Gaming brings people together. Gamers love technology and they have high expectations. That’s why we love all types of gaming at AMD.”

Phil Spencer, head of gaming at Microsoft, joined Su on stage. “Gaming has truly become a mainstream form of entertainment,” he said. 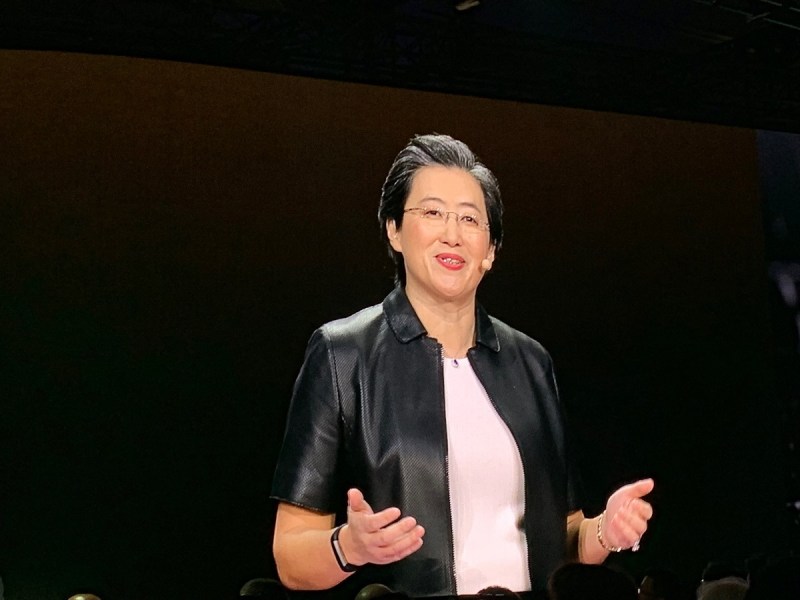 He said the cloud is playing a more important role in the world of gaming today. He said the critical components for the next decade of games are content, community, and the cloud. Microsoft is working on Project X Cloud, to enable gaming on any device. But they made no announcement of future work.

AMD has a bit slow on the graphics chip side, lagging behind Nvidia in the latest generation of graphics chips. But it did introduce the AMD Radeon RX 590 last December.

Radeon VII goes on sale for $700 on February 7. Jensen Huang, CEO of Nvidia, said in a Q&A after the keynote that the performance of the Radeon VII was “underwhelming.”

Overall, this was a big day for AMD. It was the first time had been on the big stage in Las Vegas in 2002 when it keynoted Comdex and like then, brought the goods,” said Patrick Moorhead, analyst at Moor Insights & Strategy, in an email. “The biggest surprise of the day was AMD’s re-entry into the enthusiast graphics space, which it hasn’t seen in at least five years. With Radeon VII, the company is more than doubling its highest consumer graphics card price ($249 to $699), which is big. I believe the Radeon VII will perform best in the consumer creative space given its 16GB of HBM, but it will also perform well in gaming. Radeon VIIs success will be dependent on how many the company can make and the importance gamers put on features like the competition’s accelerated ray tracing.”