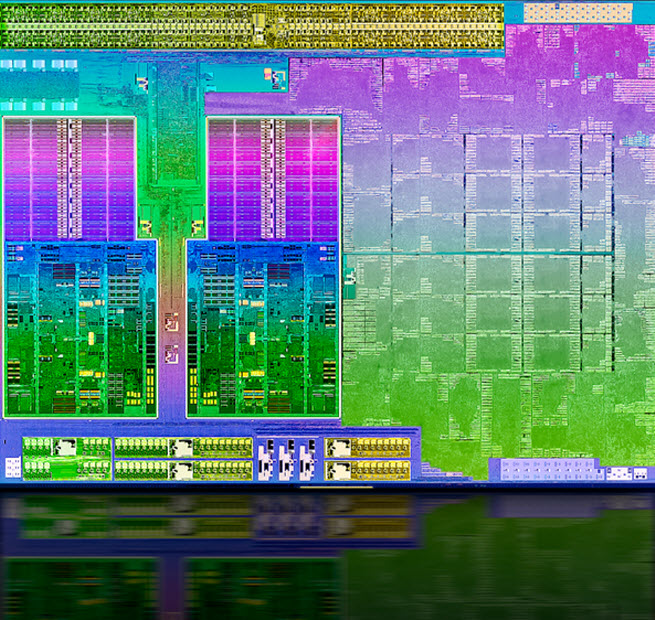 Advanced Micro Devices (AMD) is introducing a new generation of chips that combine graphics and processors on a single integrated circuit. Code-named Trinity, the new chips are supposed to stop Intel from dominating the consumer Ultrabook laptop and all-in-one desktop chip markets.

The A-series accelerated processor unit (APU) chip family is speedy, and so it goes to show that five brains are better than one. AMD also intends to show that its hybrid chips are better than Intel’s latest hybrid processor-graphics chips, code-named Ivy Bridge. The timing of both families of chips arriving at the same time is a coincidence and a happy one for consumers shopping for PCs.

The new chips have double the performance-per-watt of power consumed. They enable high-performance laptops with as much as 12 hours of battery life.

Trinity has two dual-core processors embedded in it for a total of four processing brains. It also has a high-end graphics core that is more capable than the Ivy Bridge graphics, said John Taylor, director of global product marketing at Sunnyvale, Calif.-based AMD. The central processing unit (CPU) portion of the chip is 29 percent faster than last year’s Llano-based APUs while the graphics render 56 percent faster.

“We’ve boosted the CPU and graphics architecture over last year’s Llano chips,” Taylor said. “This is the best-in-class, all-in media performance from gaming to high-definition video.”

While Llano chips had 1.178 billion transistors, or basic computing components, Trinity has 1.303 billion. The Trinity chips are slightly bigger at 246 square millimeters, compared to 228 for Llano. And they operate on about the same amount of wattage, from 35 to 100 watts. A dual-core version of the A series chip family runs on 17 watts, while a quad-core version runs on as little as 25 watts.

Like Intel’s Ivy Bridge chips, which were formally unveiled last month, the AMD chips are aimed at high-performance but thin laptops. Intel calls these laptops Ultrabooks, and it is spending hundreds of millions of dollars marketing them this year in the hopes of staving off the encroachment of smartphones and tablets on the PC market. AMD believes that laptops based on Trinity will be less expensive than the $700 to $1,000 prices that computer makers are charging for Ivy Bridge-based Ultrabooks.

“We’ve got a clear value leadership position in this ultrathin category,” Taylor said.

Trinity also represents a threat to Nvidia, which makes stand-alone graphics chips. AMD is trying to make the hybrid graphics in its APUs so good at running 3D graphics that consumers won’t see the need for the extra Nvidia chips anymore. The AMD graphics core is based on the AMD Radeon Northern Islands graphics technology. On games such as Crysis, AMD’s graphics will render 40 percent faster. Games will run 20 percent to 50 percent faster on AMD compared to Intel, Taylor said.

From May 15 through the launch of Microsoft’s Windows 8 operating system this fall, AMD believes more than 100 computers based on Trinity will debut. Trinity chips will compete head to head against Intel’s Core i7 and Core i5 microprocessors. Taylor contends that AMD chips will provide laptops with a couple of more hours of battery life in some usage scenarios. AMD’s chips will be priced below Intel’s Core i7 chips.