Advanced Micro Devices is on a comeback and is stealing market share from archrival Intel, based on earnings results reported today. The Sunnyvale, California maker of PC processors and graphics chips reported revenue of $1.65 billion for the quarter, up 40 percent from a year earlier. Since the PC market isn’t growing at 40 percent, and since rival Intel also isn’t growing that fast, it’s logical to conclude that AMD’s latest processors are grabbing market share.

The trend was evident in the previous quarter. With the launch of its Zen-based processors in 2017, Advanced Micro Devices saw a rare gain in market share — from 8 percent in the fourth quarter of 2016 to 12 percent in the fourth quarter of 2017 — against its archrival Intel, according to market researcher Mercury Research. Now AMD has launched a wider array of chips that attack Intel’s broader product line. In after-hours trading, AMD’s stock price is up 9 percent to $10.62 a share.

It isn’t always easy to tell how much share AMD is gaining, as it mixes revenue from both processors and graphics in the same Computing and Graphics division. This quarter, that division saw revenues increase to $1.12 billion, up 95 percent from a year ago, thanks to sales of both Ryzen processors and the Radeon graphics line. 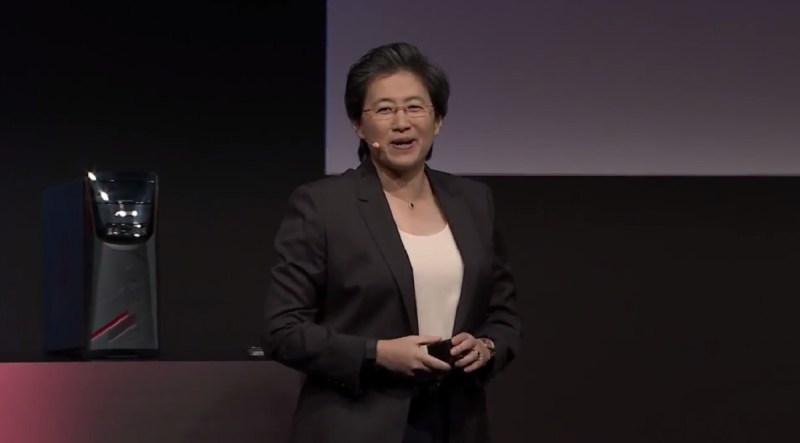 Last week, AMD launched its second-generation Ryzen desktop chips. Zen-based architecture can process 52 percent more instructions per clock than the previous generation. AMD rolled out its faster Zen-based Ryzen chips a year ago, and now the Zen technology is permeating through the whole product line. The first Ryzen chips debuted in March 2017, and by October 2017, AMD reported a return to profitability. AMD also launched its Epyc Zen-based server chips last summer, and in February it launched Ryzen mobile accelerated processing units, which combine a processor and graphics on a single chip. AMD also debuted its high-end, 16-core Threadripper processor, a contender for the fastest desktop processor, in August.

The newest Ryzen chips are targeted at PC gamers and content creators, the high end of the PC business. Anderson said that AMD will launch 60 new Ryzen systems with its partners this year. Two-thirds of those are mobile customers.

“The first quarter was an outstanding start to 2018 with 40 percent year-over-year revenue growth,” said Lisa Su, CEO of AMD, in a statement. “PC, gaming and data center adoption of our new, high-performance products continues to accelerate. We are excited about our long-term roadmaps and focused on delivering sustained revenue growth and profitability.”

In an email, analyst Patrick Moorhead of Moor Insights & Strategy said, “AMD had a blowout revenue quarter, beating guidance and growing 40 percent year on year which would make it the third straight quarter of double-digit year-over-year revenue growth. The growth was led by sales of AMD’s Ryzen client CPU and APU product line in desktops and notebooks. I expect AMD to show even more gains next quarter based on channel fill of second generation Ryzen desktop CPU, increased distribution of Ryzen mobile notebooks and the continued ramp of Epyc server deployments.”