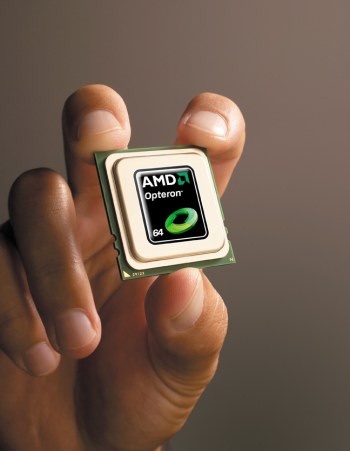 The tennis match continues. Advanced Micro Devices and Intel are in a duel for the top performance in microprocessors. Today, AMD is taking a swing with the launch of its new series of server processors for high-end computers and Internet servers.

Sunnyvale, Calif.-based AMD is launching two new families of Opteron server chips. The HE series are low-power versions (dissipating 55 watts) that can be used in power efficient computers. And the new high-performance SE series, which dissipates 105 watts, will be used in the highest-performance servers and workstations.

Last November, AMD launched its first 45-nanometer Opteron chips based on the Shanghai design. That means the circuits are 45 billionths of a meter in width. Intel moved to 45-nanometer chips earlier than AMD, so AMD has to make this transition just to keep up with Intel. The initial AMD dissipated 75 watts, while the HE series and SE series Opteron chips are the latest derivatives. The low-power chips have a feature where the chp shuts down circuits that are not in use to go into a low-power state.

The HE chips run at 2.1, 2.2 and 2.3 gigahertz, while the SE chips run as high as 2.8 gigahertz. The previous fastest chip ran at 2.7 gigahertz. Hewlett-Packard will launch new servers this week with the new Opteron chips, said John Fruehe, AMD’s director of product marketing for the server and workstation division. AMD has been shipping since the start of the month and customers are stocked with supplies.

Intel’s lowest power Xeon server processor is the Xeon i5420. The Intel chips run as high as 3.2 gigahertz, but the AMD chips are essentially just as fast, despite maxing out at 2.8 gigahertz. That’s because the AMD chips can get more work done during the tick of a clock than an Intel chip, Fruehe said. The SE chips range in price from $1,165 to $2,659. The HE chips range from $316 to $1,514.

The new server chips will make AMD competitive against the best of Intel’s line-up. But it remains to be seen if that’s going to help AMD, which has lost money for nine quarters in a row, get back to profitability.