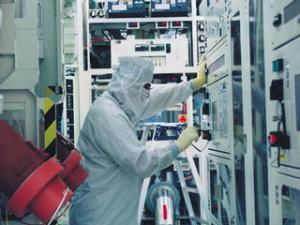 Jerry Sanders, the founder of chip maker Advanced Micro Devices, once said, “We’re the oil of the eighties” in reference to the red-hot semiconductor industry so many years ago. So it’s only fitting that oil money has come to bail out AMD in its hour of need.

The New York Times is reporting that Sunnyvale, Calif.-based AMD will split into two companies. One will focus on designing microprocessors, while the other will focus on the business of manufacturing them. The plan, articulated by AMD management earlier this year, is what the company must do to survive against the newly resurgent Intel.

Under the deal, two Abu Dhabi investment companies will invest $6 billion into both companies so that AMD can build a planned factory near Albany, N.Y., and upgrade a Germany factory. AMD will own 44.4 percent of the new entity, to be named the Foundry Company. The Advanced Technology Company, formed by the Abu Dhabi government, will own the rest.

AMD put up a valiant fight against Intel, starting in 2003, when it launched the Opteron processor. The design was both energy and memory efficient, helping to cut electricity costs just as they were spiraling out of control for data center managers. It took years for Intel to recover.

But the world’s biggest chip maker had many times more engineers than AMD and far more money to pour into factories. In 2006, Intel came up with a better chip design, based on its Core architecture. It retook just about all of the market share that AMD had gained.

Intel’s resurgence made this outcome inevitable. AMD lost money and was on the ropes; in June, it had $5.3 billion in debt and $1.6 billion in cash. The investment in the chip-making process for upcoming 45-nanometer factories is so big that chip makers would have to generate $13 billion over five years to justify the investment.

Now it has come to this. Intel will be competing against foreign governments. They are so far willing to put up the multibillion-dollar ante that it takes to compete head on with Intel. The Foundry Company will make chips for AMD and other customers too. It will in effect be a contract chip manufacturer and it will license chip manufacturing processes from IBM.