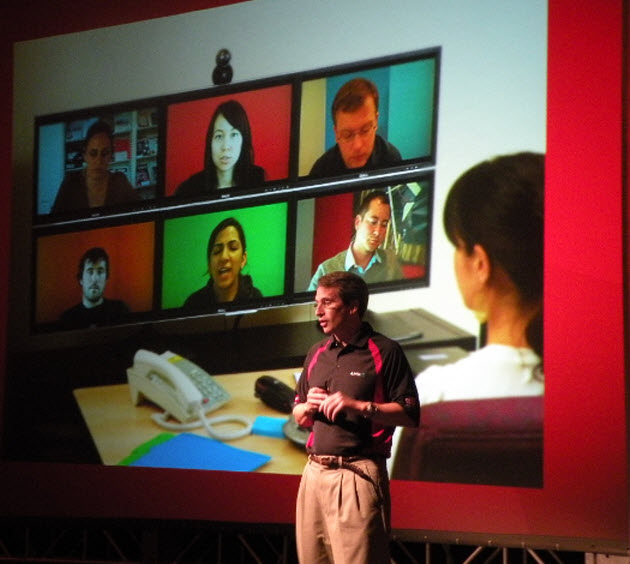 The chip maker introduced a new generation of ATI graphics chips that will be part of desktops this fall and laptops early next year. Among the new features: one PC can power six different monitors at the same time, as illustrated in the ooVoo video conference  pictured above.

The chip will drive the latest computers, but it should also give AMD a leg up on its rivals, who’ve fallen behind on their production schedules, said Jon Peddie, an analyst at Jon Peddie Research.

“At the end of the day today,” Rick Bergman, senior vice president of Sunnyvale-based AMD, said, “AMD will be the undisputed graphics leader in the world.”

The chip can do more than 2.5 trillion calculations — 2.5 teraFLOPS — every second. That compares to 1 trillion calculations per second for AMD’s chip from a year ago. That chip is as powerful as the world’s most powerful supercomputer in the year 2000. It’s about 250 times more powerful than the IBM supercomputer Deep Blue, which beat the best chess champion in the world years ago. 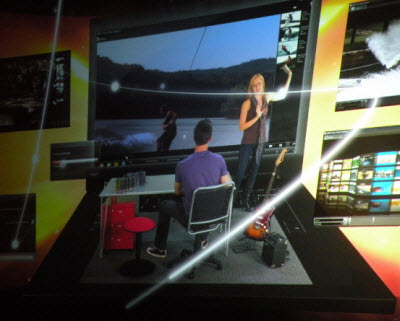 Bergman said the ATI Eyefinity multi-display technology can power six displays with a single graphics card, using DisplayPort technology. That’s a big achievement because graphics cards have to put so much data on a single display that they have a hard time handling multiple displays.

With it, gamers can set up monitors side by side to get an immersive view of their video screens as they play the latest PC games. Business people can video-conference with different people and track different things as if they were in a control room. With four graphics cards in one PC, AMD can operate 24 monitors at the same time.

It can create images with 268 megapixels, where a megapixel yields a pretty decent image on a digital camera. Game players will be able to get 12 times the full high-definition resolution. With so much screen real estate, you don’t even have to scroll around to see different documents, Bergman said.

Jules Urbach, chief executive of special effects firm Lightstage and Otoy, showed a demo of AMD’s animated mascot character, Ruby, as she is rendered to look like a real human with the latest technology. Urbach said his team is creating special effects scenes for movies that extremely realistic, yet can be created with a single AMD chip. Crytek also showed how the graphics chip can render an immersive, hyperrealistic jungle in a video game.

Acer, Dell, HP, MSI and Toshiba are creating computers using AMD’s latest graphics chips. In response, Nvidia said in a statement, “The gaming world has moved to dynamic realism, which depicts actual physical movement more realistically than ever before. For example, the No. 1 PC game coming out next week is ‘Batman: Arkham Assyum,’ which takes advantage of graphics plus physics to give it extraordinary realism. Because we support GPU-accelerated physics, our $129 card that’s shipping today is faster than their new RV870 (code name for new AMD chips) that sells for $399.”