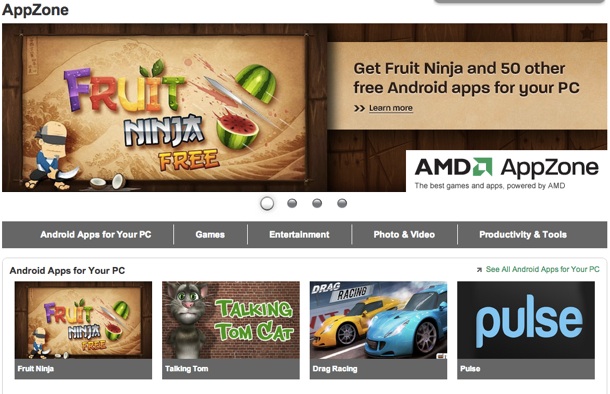 AMD has partnered with Bluestacks, a company that has developed technology to run Android apps on PCs, to expose its 100 million Windows customers to Android’s 500,000-plus apps.

AMD is launching the AMD AppZone Player today, which is aimed at Windows 7 and Windows 8 consumers equipped with AMD processors. AMD users will be able to download and search for apps through that site, which currently includes popular games like Fruit Ninja, and run them through the AppZone player. The company says it has optimized BlueStacks software for its chips.

“Our research has shown that for the youngest, newest customers, their first device is mobile,” BlueStacks CEO Rosen Sharma said in an email to VentureBeat. “Then they get a PC and expect it to have the apps their phone does. This deal positions AMD very well for this fast-growing group of young buyers.”

Back in June, BlueStacks announced a partnership with Asus, but this AMD deal could be far more useful for the startup. Now BlueStacks can easily target Windows 8 computers running AMD processors, which will include tablet hybrids and touchscreen-equipped laptops that are better suited for Android apps. BlueStacks showed off its Windows 8 app in January, so it’s clearly something the company has been thinking about for some time.