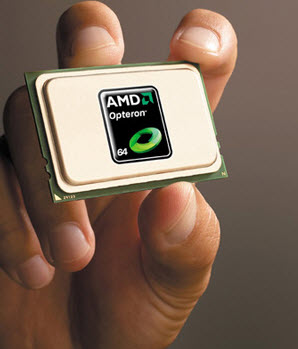 Advanced Micro Devices said its net income nearly doubled in the first quarter, but it still lags behind the performance of market leader Intel in the market for microprocessors for PCs.

Sunnyvale, Calif.-based AMD is the perennial underdog in the PC chip market, but it is an important counterweight to Intel’s near-monopoly power.

Excluding the one-time items, AMD’s profit actually declined 11 percent and revenue was up 2.5 percent. Intel, by contrast, saw its first-quarter profit rise 34 percent and revenue grow 25 percent. Intel was riding high on the launch of its Sandy Bridge processor, which combines graphics and microprocessor functions on one chip. Intel saw its prices increase, while AMD saw a decrease.

AMD’s chief executive, Dirk Meyer, left the company in January over a dispute on strategy. Thomas Seifert, interim chief executive and chief financial officer, said the results were disappointing. But he said the new code-named Llano chip that began shipping late in the quarter is one of the best the company has offered.