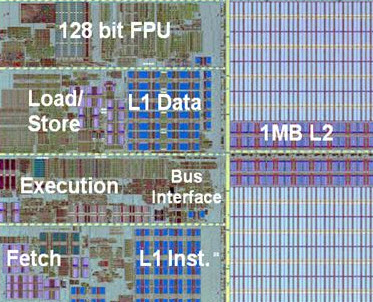 Yesterday, Advanced Micro Devices showed off the progress it has made designing a chip that combines graphics and a processor in a single chip.

Dubbed Fusion, the family of chips is getting nearer to commercial release. The chip design, which AMD revealed at the International Solid State Circuits Conference in San Francisco, has been years in the making. AMD says the idea for the chip bubbled up from observations of how consumers began using their computers to do multiple graphics and processor-intensive tasks at the same time.

Then AMD bought graphics chip maker ATI Technologies and began work on Fusion in earnest. The first chip, code-named Llano, will have four processor cores on a single chip. It will connect to the popular memory chips DDR3, and it will have a graphics engine on board that can run the latest DirectX 11 graphics. The chip will go head to head with Intel’s own Atom-based combo chips.

Llano is scheduled to launch in 2011 and will be the first chip that AMD makes using its 32-nanometer manufacturing process. (Since Intel has billions more to spend, it has already begun making 32-nanometer chips). The first Fusion chip will be targeted at mainstream notebook computers.

AMD will use “core power gating” in its processors on the chip. That means it disconnects them from power when they’re not being used. This reduces power that leaks out of the system in standby mode by 90 percent. Llano can also measure the temperature of the computing cores so that it can optimize the performance per watt consumed in real time. And it has a depopulated clock grid, a design that reduces the circuitry needed to keep power in all sections of the chip. Each core has about 35 million transistors, not counting memory.