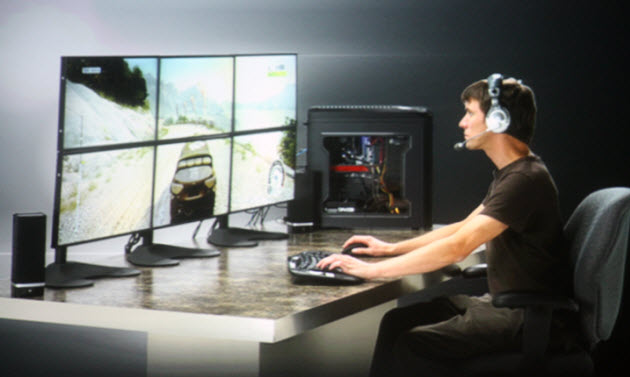 Advanced Micro Devices kicked off its “Fusion era” today with the announcement that it has shipped its first chips that combine graphics and microprocessor capability in a single chip.

Normally, those functions are built into two separate chips in a computer. By combining them, Sunnyvale, Calif.-based AMD can eliminate the cost of an extra chip in a PC without a huge sacrifice in computing performance. Some aspects of computing actually can happen faster in so-called APUs, or accelerated processing units.

The announcement could lead to new kinds of computing devices with high performance and to smaller devices. Computer makers adopting the Fusion chips are expected to debut their machines early next year. AMD rival Intel also has a combo chip, code-named Sandybridge, coming at the same time. But Intel’s graphics processing capability isn’t likely to be as good.

Nvidia, meanwhile, doesn’t have an Intel-compatible microprocessor. So it is wedded to the path of making stand-alone graphics chips, which it says will deliver much better performance than a combo chip can. On that front, Nvidia launched its fastest new graphics chip today.

Rick Bergman (pictured), senior vice president at AMD, said at AMD’s analyst meeting today that Fusion chips will deliver a better internet experience, high-definition video, cool graphics, and high-quality 3D games. The Fusion processors will be able to run DirectX 11 games, or those based on Microsoft’s DirectX graphics standard. DX11 is the most current version of the standard.

The Zacate version of the APU can operate on 18 watts and is based on AMD’s new Bobcat Intel-compatible processing core. The Ontario APU platform is aimed at netbooks and operates on 9 watts of power. Systems using the chips are expected to be announced in January at the Consumer Electronics Show. Bergman said the first Fusion products are shipping many months ahead of schedule.

A second Fusion family, code-named Llano, has four processing cores on one chip and will ship later in 2011. The highest performance Zambezi Fusion chips, with four to eight cores, will use the Bulldozer core and ship in 2011. In 2012, more AMD Fusion chips will be shipped as well.