David Wang, senior vice president of engineering in the Radeon Technologies Group, made the announcement at AMD’s press and analyst day in San Francisco. He said it can deliver up to 7.4 teraflops of 64-bit floating point peak performance.

The new Vega-based GPUs debuting later this year will be built on a 7-nanometer manufacturing process. AMD also described its Zen 2 architecture for new families of central processing units (CPUs) coming in 2019.

The GPUs in the cloud will be useful for cloud gaming, virtual desktops and workstations, machine learning, and high-performance computing, Wang said. The total available market is $12 billion by 2021, Wang said.

“This is the world’s first 7-nanometer GPU,” Wang said.

It has 13.2 billion transistors, or twice the density of the previous generation, and 1.25 times the performance. It is the world’s fastest floating point 64 and floating point 32 PCIe GPU, he said. AMD will also have an MI50 version GPU available.

One Epyc central processing unit (CPU) can connect without bridges to four Radeon Instinct GPUs via the Infinity fabric.

The chip also has a third generation of AMD’s hardware virtualization, so many users can use a single GPU.

“This is really our differentiation, and it comes for free,” Wang said.

On one benchmark, AMD’s MI60 GPU is 8.8 times faster on the DGEMM benchmark than the previous generation 14-nanometer MI25 GPU. On Resnet-50 image processing, it is 2.8 times faster. 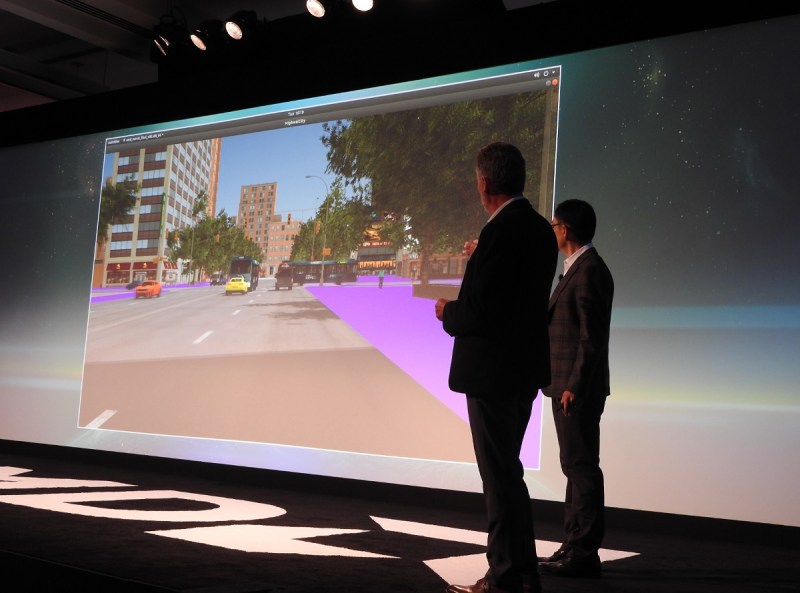 Above: Highwai shows a live demo of a machine learning simulation on the AMD Radeon Instinct MI60 graphics chip.

Wang claimed that AMD’s chip can achieve comparable performance to Nvidia’s Tesla V100 PCIe rival chip. More significant, noted analyst Kevin Krewell of Tirias Research, is that AMD’s die size (size of the chip) is less than half the size of the Nvidia chip. That translates into lower costs and lower prices.

Wang also teased a MI Next chip coming in the future with software compatibility to previous chips.

Patrick Moorhead, analyst at Moor Insights & Strategy, said, “AMD moved the ball down the field from a hardware perspective with Instinct’s 7-nanometer design. I am impressed with its one terabyte per second memory bandwidth, ganging with Epyc and Infinity Fabric, and density. I believe its degree of success will be directly related to it uptake of ROCm 2.0 software into customer’s workflow. AMD Radeon has always had good hardware and it takes hardware, software plus go-to-market to fully move the needle.”