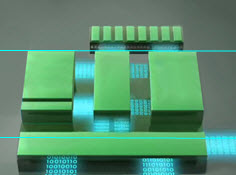 Advanced Micro Devices took the lid off the design of its long-awaited Fusion family of hybrid graphics-microprocessor chips today.

The Sunnyvale, Calif.,-based chip company has bet much of its future on these combination chips as it tries to outmaneuver rivals such as Intel and Nvidia. At the Computex 2010 trade show in Taiwan, AMD said it is on schedule to show working chips later this year and launch the Accelerated Processing Units (APUs, as opposed to central processing units known as CPUs or graphics processing units known as GPUs).

Nvidia makes only GPUs, while Intel has begun creating hybrid GPU-CPU chips with its Atom chip family. But AMD plans to marry powerful graphics components with its fast CPUs. It hopes the result will be chips that can be low-cost, low-power and high performance. AMD has signaled that this day was coming ever since it said it would buy ATI Technologies for $5.4 billion in 2006. If AMD can succeed with Fusion, it could be very difficult for both Intel and Nvidia to match the designs, and that means that somebody’s chip could be cut out of future PCs.

This design represents a significant shift in the architecture of personal computers, combining the microprocessor, which is great at processing big tasks one after another, with the graphics chip, which can process lots of small and similar tasks all at the same time.

“Hundreds of millions of us now create, interact with, and share intensely visual digital content,” said Bergman. “This explosion in multimedia requires new applications and new ways to manage and manipulate data.”

The first APUs are expected to ship in the first half of 2011, but AMD is describing the designs now so that it can get software developers working on making code to run on Fusion. Among Fusion’s supporters are Microsoft, which is providing DirectX multimedia software that works with Fusion. AMD also announced its AMD Fusion Fund to invest in companies that make software that takes advantage of Fusion APUs. That’s a page taken from Intel’s book, as Intel has done this many times as it tries to get software makers to accept its new chips.

In other news, AMD said 135 new laptop computers will be using AMD’s laptop chips in the near future.