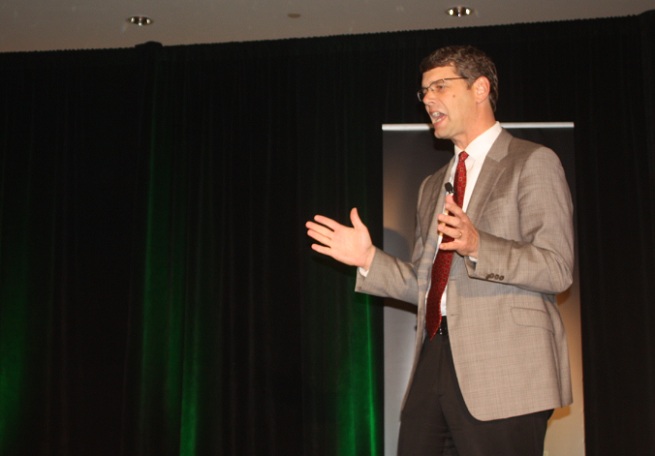 Revenues came in at $1.09 billion, down 32 percent from a year ago and a hair above expectations. And the chip maker’s net loss per share (after one-time items) was 13 cents a share, or $94 million, better than expected but down significantly from a year ago.

The Sunnyvale, Calif.-based AMD, the No. 2 maker of PC microprocessors, has had a tough year as it trailed Intel in competitiveness and saw a slowdown in demand as consumers began to favor tablets and smartphones over PCs. Since it wasn’t well positioned for that transition, the slowdown hit AMD harder than others.

Analysts expected a loss of 17 cents a share on revenue of $1.05 billion for the first fiscal quarter ended March 31. AMD had expected a 9 percent revenue drop in the quarter.

In the previous fourth fiscal quarter, AMD saw a 32 percent year-over-year drop in revenues and loss of 14 cents a share. AMD recently restructured and cut 15 percent of its staff. Over time, AMD now plans to focus 40 percent to 50 percent of its efforts in markets that are adjacent to the PC, such as low-power ARM-based microservers.

AMD gets about 80 percent of its revenue from the PC industry. Rory Read [above], the chief executive of AMD, joined the company in 2011. He was formerly the No. 2 executive at Lenovo, which has since been battling HP for the title of the world’s biggest PC maker.

Read said in a statement, “Our first quarter results reflect our disciplined operational execution in a difficult market environment. We have largely completed our restructuring and are now focused on delivering a powerful set of new products that will accelerate our business in 2013. We will continue to diversify our portfolio and attack high-growth markets like dense server, ultralow-power client, embedded and semi-custom solutions to create the foundation for sustainable financial returns.”

In after-hours trading, AMD shares have dropped 5 percent. Patrick Moorhead, analyst at Moor Insights & Strategy, said, “AMD was understandably hurt by the weak PC market and weren’t able to compensate with their custom chips in the Wii U or PS4.  They need to better take advantage of Kabini and Temash on the client side and SeaMicro on the scale-out server side to improve their fortunes.  A win at the new Microsoft Xbox could help, too.”

For some reason, AMD shares shot up in the last 20 minutes before the stock market closed, probably on rumors about the earnings.

AMD said it has completed its restructuring to reduce operating costs. The company said it is on track to hit $450 million in quarterly operating expenses in the third fiscal quarter of 2013. AMD plans on returning to profitability in the second half of 2013.

AMD said its code-named Richland processors shipped in the first quarter. The Kabini accelerated processing unit began shipping to customers in the first quarter. That chip (which combines a microprocessor and graphics on the same chip) targets ultrathin laptops with good battery life. AMD has also begun shipping its first tablet chip, code-named Temash, for Windows 8 tablets and hybrids.

Sony also announced in the first quarter that its PlayStation 4 is using a semi-custom APU from AMD. About 20 percent of sales will come from semi-custom and embedded design wins in the fourth quarter.