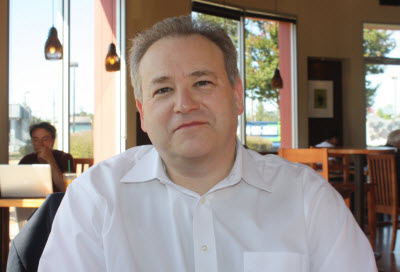 Advanced Micro Devices is doing something today that seems rather unfashionable. The chip maker is announcing a series of new additions to its desktop and laptop microprocessors.

It seems so mundane to introduce PC chips at a time when competitors Intel and Nvidia are racing off into smartphone, tablet and “ultrabook” (thin laptops) chips. Hewlett-Packard said last week that its PC business might be put up for sale, in part because tablet demand was hurting PC sales. AMD makes chips for laptops with larger screens and more performance, but not for tablets and smartphones. That distinction may not seem like a huge one, but it is.

“From a supplier point of view, those are very different markets,” said Nigel Dessau (pictured), chief marketing officer at Sunnyvale, Calif.-based AMD, in a recent interview. “We will focus on the ultra thin-and-light laptops, but not the smartphones and tablets for now.”

It’s worth noting that roughly 360 million PCs are expected to be sold this year, so the unfashionable market is nevertheless a huge one.

Complicating things for AMD is the fact that it is operating without a chief executive. Dirk Meyer, the former CEO, left in January after a dispute with the board about AMD’s direction. Chief financial officer Thomas Seifert is interim CEO and the search for a new CEO is being headed by AMD chairman Bruce Claflin. AMD has yet to say when it will bring on a new boss. 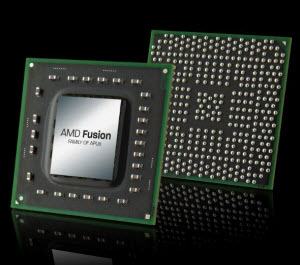 In its second quarter earnings conference call, AMD called attention to its graphics chip business. Those chips are being used to create visual experiences outside of the PC business. AMD’s graphics will be used in Nintendo’s upcoming Wii U console. AMD chips are already used in the Nintendo Wii and the Microsoft Xbox 360. It’s a big market: Roughly 120 million game consoles are expected to ship in the next three years.

AMD is also focused on reducing the power consumed by its chips — an area where Intel has been leading the charge in the PC market, although ARM-based rivals have an edge on Intel in the smartphone and tablet markets.

“When it comes to power, we get it,” Dessau said.

The new chips deliver better high-definition graphics, overall performance, more efficient memory, and better power efficiency. Laptops that use the chips could get about a four-hour improvement, boosting resting battery life to 12 hours (on the C series chips). Resting battery life refers to how long a single charge lasts when a laptop is turned on but not actively computing. A number of computer makers are shipping computers with the new chips starting today.

AMD said it has shipped more than 12 million APUs and sold more than five million C series and E series APUs in the second quarter.

As for tablet computers, Dessau said, “I’m not convinced there is a tablet market yet. I know there is an iPad market.” AMD can’t make chips for iPads since Apple designs those chips itself.

At some point, after Microsoft’s Windows 8 operating ships (as early as 2012), then AMD might have a better value proposition, Dessau said. Windows 8 is expected to be able to run on both PCs and tablets. Of course, AMD will face new competition when rivals such as Nvidia, Qualcomm and other ARM-based chip vendors come into the Windows 8 market.

For 2012, AMD plans to introduce a Fusion chip, dubbed Trinity, in the notebook market. That chip will consume less than half the power of today’s lowest-power 35-watt Llano-based APU. By 2013, AMD said it plans to introduced an APU that is even further optimized for tablet devices than its current line-up of portable chips.

“We’ve had a lot of work on the strategy side, but it makes sense to wait until the new CEO comes on board before we describe it,” Dessau said. “We’ve not been sitting still. Since chips have a long lead time, any product we introduce this year was planned 2.5 years ago. Now we’re deciding what kind of products to put out in 2014.”