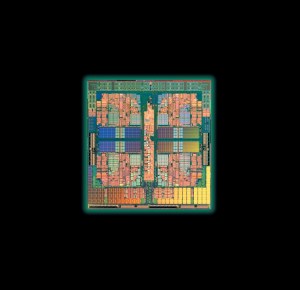 Advanced Micro Devices has been losing out to Intel for a couple of years in server microprocessors. But it hopes to make a comeback with a series of new microprocessors for servers in data centers.

Today, the Sunnyvale, Calif.-based company is introducing the latest version of its Opteron microprocessor with four computing cores. The server chip is the first to use the 45-nanometer manufacturing process that is critical to keeping up with the manufacturing might of Intel.

Of course, this AMD turnaround could run smack into the recession. Intel pre-announced lousy results today for the fourth quarter, saying that sales would now fall about 12 percent from the third quarter; previously, the company expected sales would rise 3 percent. Intel now expects $9 billion in revenues for the fourth quarter, plus or minus $300 million. It previously expected sales between $10.1 billion and $10.9 billion. Analysts were looking for $10.3 billion.

The AMD processor is code-named Shanghai and will now be known as the 2000 series and 8000 series Opteron processors. The processor speeds range from 2.3 gigahertz (which is currently the top speed for Opteron chips) to 2.7 gigahertz.

Intel will offer its own arguments as to why its code-named Nehalem processors are superior to the latest Opterons. But Steve Demski, an AMD product manager, said that AMD will continue to emphasize the performance per watt — or power efficiency — of its processors. The new chips have features such as better virtualization (the ability to run numerous types of software on one server) and range in price from $377 to $989 in 1,000-unit quantities. AMD will launch a desktop version of the chips in the first quarter.

It remains to be seen if the new Opterons will help AMD regain market share that it lost to Intel in the past two years. AMD grabbed the upper hand in servers in 2003 with the launch of the power-efficient Opteron family. But Intel struck back in 2006 with the Core 2 server chips. AMD launched its rival chip, code-named Barcelona, in 2007. But that chip had a bug and was delayed, resulting in big losses for AMD.

“We didn’t execute in our last generation and that caused pain for AMD and its customers,” Demski said. “We are in much better shape in this generation.”

AMD had originally scheduled the Shanghai launch for the first quarter of 2009, but it was able to speed up the launch to today. Last week, AMD hosted a roundtable of server makers who said they would use the new chips. Included were Penguin Computing, Appro, Colfax International, Verari Systems, and Rackable Systems. Those aren’t the biggest customers, but there was a day when AMD couldn’t get any server makers to defend it.

John Lee of Appro said that in certain segments such as high-performance computing, AMD has remained ahead of Intel. Appro uses AMD chips in a variety of supercomputers, he said. In the last couple of years, Intel has made inroads into the product line but now AMD is more competitive, he said.

Bill Calder, a spokesman for Intel, however, said that AMD remains a generation behind Intel. He noted that AMD doesn’t have a critical feature for its 45-nanometer production: high-K dielectric, which produces lower power chips. He also said that Intel chips currently hold the top six spots on the SPECPower benchmark for high performance and low power. It isn’t clear if AMD will be able to beat Intel’s new generation of chips, let alone Intel’s current chips, based on leaked reports.

Shane Rau, an analyst at IDC, said that Shanghai represents AMD’s opportunity to regain its competitive position against Intel in server processors, where customers genuinely want two legitimate suppliers to ensure fair pricing and product diversity. Intel has 85.6 percent of the server processor market in the third quarter of 2008, compared to AMD’s 14.3 percent. That compares to Intel’s share of 75.2 percent and AMD’s 24.6 percent share in the third quarter of 2006.

Beyond competitive concerns, a more pressing problem for both AMD and Intel is the economy. Although the recession is hurting information technology sales, Demski said that big companies will pay more attention to getting more for their server purchases now.