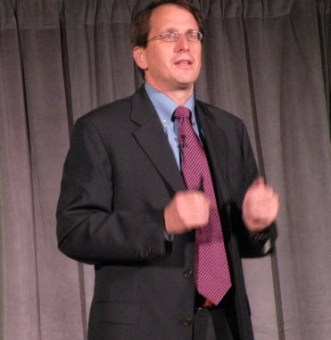 Advanced Micro Devices released new details on its long-awaited Fusion chips, which combine graphics and microprocessor functions into a single chip in a computing platform that will launch in 2011.

Rick Bergman, senior vice president and general manager of AMD products (right), said at the company’s analyst meeting today that AMD is preparing a whole series of Fusion chips that will be made using a 32-nanometer manufacturing process that will be ready for full-scale production in 2011.

The chips will hit new targets in power efficiency, performance, and size and could be used in powerful desktop computers as well as the smallest netbooks, which are smaller than laptops and are meant for surfing the web.

These chips will have more than a billion transistors on them, Bergman said, but will likely be smaller and less powerful than separate, stand-alone microprocessor or graphics chips that launch in the same time frame.

The point is that they eliminate a chip in the PC system, cutting out costs and processing bottlenecks. The new chips also puts pressure on Intel and Nvidia, which make separate chips.

Samples of these chips will be sent to customers in the first half of 2010. They’re on schedule for production in late 2010 and will likely appear in customer PCs in 2011, Bergman said. That’s a shorter timeline than ever before. AMD has been promising Fusion chips since it acquired ATI Technologies for $5.4 billion in 2006. But it has delayed the launch, due to the difficulty of designing combination chips. Today’s schedule is consistent with the roadmap AMD announced a year ago.