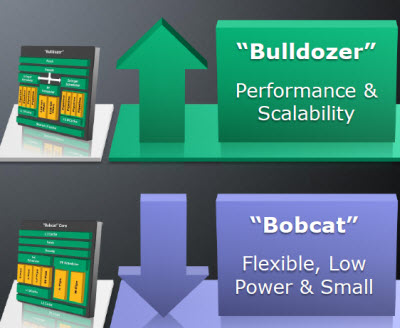 As Intel is busy moving into the software business with its $7.68 billion purchase of McAfee, Advanced Micro Devices is taking the wraps off its newest processor designs, Bulldozer and Bobcat, which it hopes will give a one-two punch at Intel’s core business.

At the Hot Chips conference today at Stanford University in Palo Alto, Calif., AMD will describe its new processor cores, which are the brains of computer chips. AMD will take the cores and replicate them on chips, launching chips that have as many as 16 cores on a single chip. It’s pretty rare for AMD to unveil two cores at once, said Dina McKinney, corporate vice president of design engineering at AMD.

Bulldozer will be a core for mainstream PC desktops and servers. Bobcat will be a low-power core aimed at laptops, tablet computers and other smaller devices. McKinney said Bulldozer’s design is clever because it includes two “strong threads,” or pipelines so that two tasks can be done simultaneously.The pipelines share different resources inside the core, such as memory.

“These are not just two cores slapped together,” McKinney said.

Bulldozer will be built with AMD’s 32-nanometer silicon-on-insulator technology. That means it can be made in factories being built by its partner and sister company, Globalfoundries. Bobcat is a “synthesizable core,” meaning it can be manufactured in a variety of 40-nanometer chip factories owned by different companies. The Bulldozer core will be used in AMD desktop and server chips that launch in 2011. It delivers 33 percent more cores and a 50 percent increase in throughput using the same power as AMD’s current flagship core, code-named Magny-Cours. Bulldozer will be eventually used in AMD’s upcoming “accelerated processing units,” or APUs, which put a microprocessor core and a graphics core on a single chip. AMD says one of its new chips using the Bulldozer core is code-named Interlagos, with 16 cores on a chip. Another is Valencia, with 8 Bulldozer cores.

Bobcat will also be used in chips (code-named Ontario) targeted at laptops and other small devices debuting in early 2011. One of its hallmarks will be that it operates on less than a watt of power per core. That’s pretty impressive, considering many laptop processors today operate on 25 watts. The design uses power gating and clock gating, which are ways to isolate certain parts of a chip and turn them off if they aren’t being used. Intel will also be showing off one of its existing chip designs, code-named Westmere, at Hot Chips.