Advanced Micro Devices had a big comeback year in 2017 with the launch of its Ryzen processors and Vega graphics chips. Today, the company is announcing more heavy-duty computing and graphics chips coming out in 2018.

The chips include accelerated processing units (APUs), or desktop chips with both Ryzen processors and Radeon Vega graphics built into them in a combo chip. AMD also has a full line of Ryzen mobile APUs coming, as well as second-generation Ryzen desktop central processing units (CPUs) arriving in April. That’s a big salvo aimed at rival Intel, the world’s biggest chip maker.

The CPUs will be based on a 12-nanometer manufacturing process, where the distance between circuits is just 12 billionths of a meter apart. The Sunnyvale, California company made the announcement at CES 2018, the big tech trade show in Las Vegas this week, and it will put pressure on Intel to respond.

In graphics, AMD announced the expansion of the Vega family with Radeon Vega Mobile and said that its first 7-nanometer product will be a Radeon Vega GPU specifically built for machine learning applications.

“We successfully accomplished the ambitious goals we set for ourselves in 2017, reestablishing AMD as a high-performance computing leader with the introduction and ramp of 10 different product families,” said AMD president and CEO Lisa Su, in a statement. “We are building on this momentum in 2018 as we make our strongest product portfolio of the last decade even stronger with new CPUs and GPUs that bring more features and more performance to a broad set of markets.”

Mark Papermaster, chief technology officer at AMD, said in a press briefing that the Zen core, currently shipping in Ryzen desktop and mobile processors, is in production at both 14-nanometer and 12-nanometer processes and that the 12-nanometer samples are now shipping.

He also said the Zen 2 design is complete and will improve on the award-winning Zen design in multiple dimensions. AMD is on track to deliver performance and performance-per-watt improvements
through 2020.

In graphics, AMD expects to expand its Vega product family in 2018 with the Radeon Vega Mobile GPU for ultrathin notebooks. 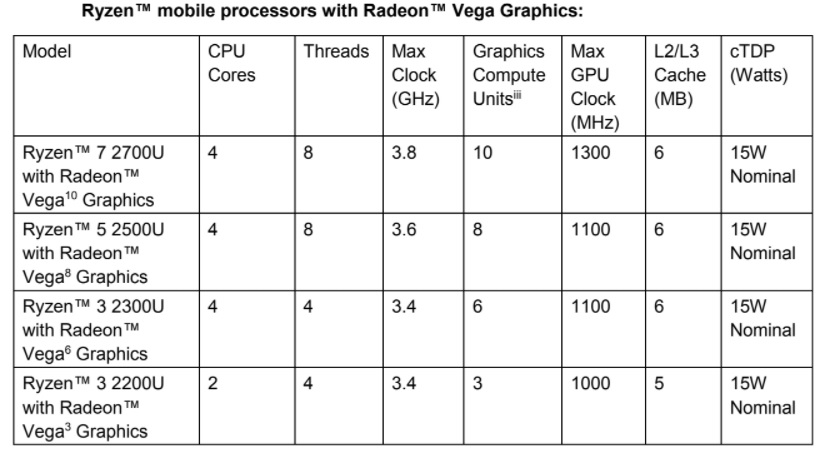 Above: AMD’s specs for its latest Ryzen mobile processors with Radeon graphics.