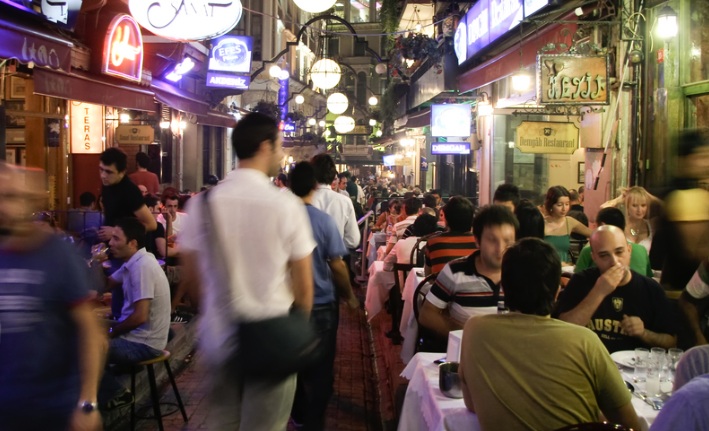 Getting enough data to make local recommendations has proved tough. A restaurant reviewer writing for a local newspaper might write a hundred or so reviews a year. Zagat might cover several thousand in its printed books. Yelp provides near universal coverage in the United States, but it still doesn’t have enough information to provide useful recommendations.

But American Express is sitting on top of some of the best data in the world with which to make recommendations: transaction histories of millions of cardholders. (Disclosure: I have a very tiny stake in AmEx.) I’ve been an American Express cardmember since 1993. In theory, AmEx has 18 years of data on me. (AmEx spokeswoman Charlotte Fuller declined to comment on how far back AmEx keeps transaction data.)

Last month, AmEx collected 60 data points on me from my transactions. If you view everyone of those as a check in, you realize how powerful that is. Very few companies have as much data on me. The likely suspects are Facebook, Google, Twitter, and the various ad networks. Most startups certainly don’t. And other credit card networks like Visa and MasterCard don’t own the relationship with the card holders — Citibank, Chase, Bank of America and other issuers do — so the data is spread thin.

The data that AmEx has is much higher quality than what Facebook, Google and the others have:

For each transaction, AmEx knows who made it, the dollar amount, and the time. This may not seem like enough data, but if you get it in the volume that AmEx does, it gets really interesting. Although AmEx does not disclose the number of transactions on its network, last year it processed $822.2 billion in transactions. By my estimates, it is processing between 5 and 10 billion transactions a year. That’s a lot of data! By contrast, Yelp has 27.6 million reviews in its entire history, about 20% of which are spam. AmEx has 98 million cards in force. That is a lot of unique users contributing data.

In addition to the data AmEx gets from each transaction, it has relationships with cardmembers and merchants. For each card, it knows the billing address, user’s age, affinity (for example, my primary card is the Starwood AmEx) and type of card (personal, small business or corporate). For each merchant, it knows the location and typical volume. With its partnerships with Twitter, Facebook, and Foursquare, AmEx is also connecting its records with social media identities.

Here are some of the things that AmEx could do with all of these data:

AmEx knows me well enough to know what I typically buy. It uses this to figure out fraud. I recently tried to make a $245 purchase at Brookstone. Buying overpriced crap doesn’t fit my profile, so AmEx rejected the charge. (Charges for $500 and $1,500 on Amazon fly through.) When you’ve got money on the line, you have to invest in good algorithms.

I would love to see AmEx use all of its data and algorithms to help me make decisions on where to spend my money.

AmEx clearly sees the value in it, too.

“Data is going to be the driving force of commerce going forward,” Dan Schulman, AmEx’s Group President for Enterprise Growth told me back in January. “In many ways, the data associated with making a transaction may very will be more valuable than the value that you get as a financial services company from helping to complete that transaction.”

So why doesn’t it move faster? My sense is that the company is worried about getting too far ahead of consumers. It’s also hyper-concerned about privacy.

“We need to make it clear that while we definitely look at data as a tool to better service our customers and deliver value in new and innovative ways, we have strong privacy policies in place to inform customers of how and when we use their information, as well as offer them the ability to opt-out of ANY information sharing,” Fuller said. I’ve asked AmEx executives at various levels for data and the answer is always the same: no.

Like any large data set, this one has limitations. When I was walking through this concept with someone I know at AmEx, she said that algorithms based on AmEx data would never recommend Peter Luger’s steak house, because Peter Luger’s doesn’t accept any credit cards. That’s not ideal, but the ability to get recommendations without doing all of the work Yelp requires is still highly valuable.

AmEx also does not currently have SKU-level data. It knows I spent $39.95 at Amazon on April 16 but not that I bought the Le Creuset Stoneware Fruit/Pasta Bowl, Casiss. With SKU-level data, AmEx likely would have allowed the Brookstone charge to go through, knowing that Pan Am cufflinks fit with my profile as an aviation buff. AmEx could even have recommended them based on my earlier purchase of Concorde cufflinks.

Large retailers like Amazon are unlikely to share SKU-level data with transaction processors. That data is too valuable. But smaller retailers might. At a much smaller scale, that’s what the small businesses that use Square Register are doing. Square knows that when I’m in San Francisco, I have a fugazetta empanada at El Porteno. Square should be able to recommend other places I would like when I’m traveling.

This can all be done without me writing a single review. Watch what I do, not what I say I do.