Mike Dudas, who works on Google Wallet, was so impressed by American Express’s brand new Twitter program that he tweeted:

AmEx digital marketing & promotion team is playing a different game than any other card networks or issuers. Brilliant…

Leslie Berland, SVP of Digital Partnerships & Development at AMEX, said the promotion was so popular that they ended up with 17 launch partners instead of the 5 that were initially planned.

In order to redeem a deal, you send a tweet with a hashtag and the offer is loaded on to the account. (A one-time registration process is required to connect the credit card account with the Twitter handle.) For example, to load the Whole Foods offer on to my AMEX card, I tweeted:

I love the cheese and wine at #AmexWholefoods.

The credit appears automatically when the card is swiped. I haven’t had a chance to redeem an offer with the Twitter integration yet, but AMEX has previously announced similar deals with Foursquare and Facebook. When I used an AMEX/Facebook deal to check into a hotel, an email confirming my discount was waiting for me by the time I got to my room.

Just as important as the product launch is that AMEX gets Twitter and is using the Twitter platform natively. As soon as I tweeted, I got a @rakeshlobster mention confirming that the deal was loaded to my card. Instead of a separate landing page to highlight the special offers, AMEX presents them as a list of favorites from the AMEX Twitter account. Each links back to the merchant’s Twitter account. That’s the kind of smart thinking and brand integration I rarely see. (Though they did miss the opportunity to use the Promoted Tweet video for the new launch.)

“With Twitter, we’ve really hit the trifecta. We have a great platform in Twitter,” said Ed Gilligan, vice chairman of American Express. “We know our cardmembers are engaged in Twitter. We’ve been working with them to think about how can we help them move from conversations to commerce. To turn a tweet into a transaction.”

As a test, I tweeted a question for this story to American Express instead of emailing my press contact. In about 15 minutes, I had the answer by direct message.

Because of Twitter’s reach and broad exposure, merchants get exposure to new potential customers. That can be powerful for spreading beyond existing followers on Twitter.

“Twitter being realtime, being viral conversationally as it is, enables a totally new way for us to manifest this technology,” Berland said. “The viral nature of the conversations and the hashtags — that’s very unique to Twitter.

That activity is already happening. Here’s a screenshot of search results for the Whole Foods hashtag: 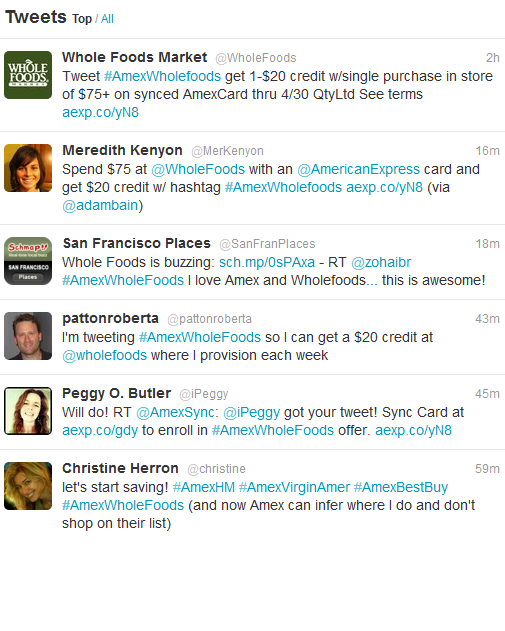 There are limitations. The current product doesn’t support targeting. For example, a marketer can’t limit an offer to its followers or try to entice away followers of another brand or limit it to people with a certain number of followers. Unlike the Facebook integration, small- and medium-sized businesses can’t yet participate. In the future, Berland imagines the platform being used for things like flash sales.

Along with Square, American Express is the only marquee company that is building products that work for real consumers and merchants today. Google Wallet and PayPal’s new offline initiative require significant changes for merchants in terms of hardware or software and staff training. Google’s NFC remains a technology in search of a problem. With the AMEX offers, clerks and service staff don’t need to know anything about the promotion; it’s all handled on the back end. Staff training is a critical part of the redemption process and is often overlooked. If it takes 5 minutes to redeem an offer, it can annoy customers.