High-speed data networks on cell phones, such as the iPhone, are anything but high speed. But Quantance, a chip maker that has just raised $12 million in funding, has a solution that could triple data speeds in future phones at very little cost. If this works out, our cell phones could wind up being faster than our computers at acccessing the web.

The San Mateo, Calif.-based company is an analog chip design company with a remarkably small number of employees — 13. But it has been able to design a tiny chip that can boost the output of power amplifiers, small but critical devices in cell phones. 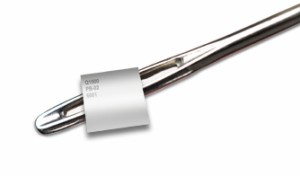 The new Q100 chip (left, smaller than the eye of a needle) is available in engineering samples now and should be built into new phones sometime next year, said Vikas Vinayak, chief executive of Quantance, in an interview. The technology could be used in both current 3G phones as well as future-generation 4G phones based on high-speed WiMax and Long-Term Evolution networks.

Vinayak said the patented innovations in “radio frequency transmit chain efficiency” mean that the chip can boost a phone’s power amplifier so that it can send out a stronger signal to cell phone sites, known as base stations.

It’s remarkable that the company was able to finish the chip with just eight employees (it has since added five). It shows that innovation with small teams is possible in the semiconductor space, said Eric Zimits, a partner at one of the investors, Granite Ventures. Such small start-ups are rare in chips, since many firms such as eAsic have raised $100 million or more. But with analog chip design, much depends on the experience of a single analog engineer, as was proven by another analog chip company, Samplify Systems.

Faster data speeds could relieve user headaches with phones such as the T-Mobile G1 with Google Android software or the iPhone. Both of those phones depend heavily on strong connections to the Internet for many services. With faster networks, use of the web on cell phones could become even more practical and less frustrating than it is today. Moreover, the higher-power signals will also mean that cell phones will have reception in areas where they had weak signals before.

With the second round of funding announced today, the company will have the cash to launch the chip into the market, Vinayak said. Quantance was founded in December 2005 and raised a first round of $7 million in 2006. The second round was led by new investor TD Fund, and it was joined by another new investor DOCOMO Capital, the venture arm of Japan’s big cell phone carrier.

Previous round investors Granite Ventures and InterWest Partners also participated. Jim Pastoriza, managing partner at TD Fund, will join the Quantance board. Quantance says that carrier-audited tests in the U.S. and Europe show that its chip works and results in better coverage and faster data networks. Of course, we have yet to see how large numbers of the chips will perform inside cell phones. The company hopes to hit high-volume production in the second quarter of 2009.

Vinayak said the company was seeking only $10 million in the round, but the reception was so enthusiastic that it expanded it to $12 million.