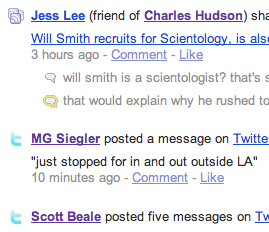 Facebook news feed has been a hit with users because it automatically displays the latest photos, newest friends, and other updates from your Facebook friends.

The problem, though, is that most people use any number of other sites as well — such as messaging service Twitter, video site YouTube, photo-sharing site Flickr, to name a few. There’s been no good way to see what your friends are doing on different sites around the web from one central place.

Now, there are two feed services, FriendFeed (screenshot, above) and Plaxo Pulse, that do a good job of solving this problem. I expect both — and especially Friendfeed — to become a hit this coming year, as I’ll explain, below.

FriendFeed and Plaxo Pulse let you designate friends, then easily add feeds of your activities from other sites. The result is that each user sees a continuous stream of updates from friends — Twitter messages, uploaded YouTube videos, blog posts, shared Google Reader items, and much more. Both FriendFeed and Plaxo include community discussion features, such as commenting on others’ items.

Other startup competitors that are offer similar services include Spokeo and clip-sharing sites Plum and Clipmarks.

Friendfeed is becoming a valuable social hub. Get ready for more.

Within the past couple of weeks, FriendFeed has quickly become one of the main ways I track what interesting people are up to. It offers a compelling new way to communicate with people you care about, a clean, easy-to-use design and a small but vibrant community to connect with — the same factors that drew many people to messaging service Twitter when it began to grow quickly last year.

I’ve assembled a small group of friends who are also using the service — many of whom don’t know each other — and we’re starting to get some interesting conversations happening within FriendFeed on various feed items.

FriendFeed launched in October and has a lot of important details right that make it fun to use. Examples:

– It’s easy to find people you want to keep track of: FriendFeed recommends new friends to you who are already popular with your friends (details here)

– Commenting on a feed item takes two clicks; it also lets you “like,” or vote to approve of, an item in one click

FriendFeed also has a clever Facebook application (screenshot below). Once you install the FriendFeed Facebook app, you’ll automatically see your friends’ FriendFeeds if they also have the Facebook app installed. These people aren’t just fellow Facebook app users — once they add the app, they’re also your friends in the free-standing FriendFeed site. FriendFeed, in turn, shows all the activity you see on the Friendfeed site within Facebook.

To spur further sharing, FriendFeed has also recently introduced a feature that lets you see feed items from the friends of your friends. To be clear, it only shows friends of friends who have made their feed public (an option on the site), and only when one of your friends likes or comments on the entry.

However, there’s no clear way to stop these pseudo-friends from seeing what you submit, as blog Webomatica notes in an otherwise positive review. FriendFeed says it’s working on controls to make that more clear. I think the feature is executed right, as is, because you’re essentially getting introduced to conversations with strangers via people you’re already friends with. It’s a mechanism for measured, viral growth.

Another plus for FriendFeed is that it’s formed a strong base of influential users. Primarily, it’s used by early Googlers and their many friends. The company was founded (and funded) by former Gmail team members Paul Buchheit and Sanjeev Singh together with Google Maps engineers Bret Taylor and Jim Norris. It’s also getting championed by early-adopter bloggers like Louis Gray.

And, it recently brought in Kevin Fox, the user experience designer who worked on Gmail, Google Calendar and Google Reader.

In recent weeks, I’ve noticed a spike in the number of tech geeks and bloggers using the site.

Note: Most feed items, from what I’ve seen, currently come from Twitter, Google Reader shared items, direct blog feeds, and social news sites Digg and Reddit, with a generous smattering from photo services like SmugMug and Picasa and music services like Last.fm. That’s judging from what I’ve seen on my Friendfeed friends’ feeds and on the site’s public feed, an aggregated feed of all members’ publicly shared items.

For more background on Friendfeed, see our earlier coverage.

Meanwhile, Plaxo has been developing a similar concept. It’s a feed of what the people you’re connected to within Plaxo are up to on many of the same sites you can see on Friendfeed — Twitter, YouTube, Reddit, Delicious, etc.

The service is getting big. More than one million people are using Pulse per month, up from 250,000 in November, with close to two million daily pageviews, the company says. Anecdotally, I’ve been getting an increasing number of invites from friends who are using it. Screenshot:

Not everyone is taking these invites well, due to the company’s history. Back in 2003, Plaxo was taken to task for sending spammy emails between users, asking people to update their contact info in their friends’ Plaxo address books. The person supposedly asking their friends for updates often didn’t know that their friends were receiving these emails.

“Plaxo Pulse is the latest in Plaxo spam. I get 20-30 of these a day. It’s nuts and as far as I can tell there is no value in the service, ” investor and blogger Fred Wilson twittered in early November. Others have more recently suggested to me that Plaxo is letting Pulse send out a high number of email invites to grow user numbers quickly.

The company should be forgiven for its past behavior at this point, although when it tried its latest initiative — extracting friends’ emails from Facebook (our coverage) — it got mixed reviews. 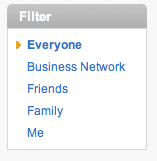 In fact, I think Plaxo has gotten overly conservative with giving users control over who gets to see what. It’s created different categories of friends for you — personal friends, family, work colleagues, etc. — that FriendFeed doesn’t bother with. Here’s how ex-Googler Charles Hudson explains the problem:

With Plaxo Pulse I have to “friend up” my pulse network and make decisions about which people I’d like to allow access to which types of data. In addition, I have to classify my contacts by the nature of our relationship. I initially found the privacy controls on Plaxo to be useful, but now they’re becoming a bit tedious to manage. FriendFeed makes this process a lot easier.

Plaxo is on the right track with Pulse. Its advantage is that it is much larger than Friendfeed and already has the email addresses and friend connections contained in its existing services. But Friendfeed comes across better on many fronts: Trust, ease-of-use, successful Facebook integration and an influential user base.

Friendfeed, which isn’t disclosing its traffic numbers, says it is focusing on fine-tuning the product before it aims to grow.

Plaxo, meanwhile, says it has kept Pulse in a sort of open private testing mode, and has yet to promote the service to many of its users.

Facebook offers its own set of applications that duplicate popular sites on the web. For example, it offers its own photo-sharing service — the number one photo sharing application on the Web, with twice the traffic of its nearest three competitors, according to ComScore (via Jeremiah Owyang). Still, it is hard for me to imagine Facebook creating a set of services that can beat the entire web, including sites like YouTube.

There are too many competitors, too many valuable services that people aren’t going to stop using just because Facebook offers the same thing. Latest example: Twitter has maintained its role as a sort of messaging service where each of your posts answers the question “what are you doing?” — even though Facebook introduced a status update service last spring, that asks you “what are you doing right now?” within Facebook.

Also, FriendFeed (and in my opinion, Plaxo) may end up offering more than Facebook to other web startups. As Michael Arrington wrote when FriendFeed launched:

“FriendFeed will be a social network itself, of course. But it may also allow niche social networks, focusing on just one thing like movies or music, to thrive while simultaneously allowing users to have a single feed to aggregate all that they are up to. That means Facebook and the other giants don’t have to be everything to everyone (or at least that people don’t have to use it that way).