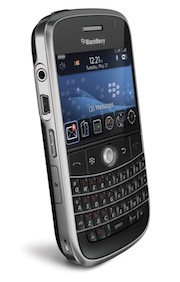 The new BlackBerry Bold smartphone, which is widely seen as manufacturer Research in Motion’s attempt to steal some of the iPhone’s thunder, will be a “big improvement” over previous models, says Citigroup analyst Jim Suva. He and his team reportedly spent 12 hours testing the new phone and came away impressed.

Suva has predicted that the Bold will play a key role in RIM’s fortunes in the coming months. It’s already available in Europe, and will launch in Canada tomorrow, but a U.S. release date hasn’t been announced.

The Bold has done a good job of catching up on one of the iPhone’s biggest advantages, namely its web browser. Suva says the new browser improves on the Curve and Pearl BlackBerry models. The display is better, too; Suva reports using it to watch the Will Ferrell film Talladega Nights. (Not that I imagine many folks would actually want to watch a full movie on their BlackBerries — the thought of shrinking Lawrence of Arabia down to a mobile display makes me want to cry — but it’s a worthwhile test.)

One of the biggest complaints about the new iPhone has been the erratic 3G connection, although that has improved with firmware updates. Suva says the Bold also has some 3G connection issues, particularly on streets with tall buildings, and predicts RIM won’t offer the phone in the United States until those issues are fixed.

Overall, he says the Bold is “a strong product but not a game changer.” The report isn’t online, but Silicon Alley Insider and Reuters both have summaries.