In the past couple of years, there were a lot of stories about how Moore’s Law was slowing down. That was a reason for financial panic, as it suggested that technological progress was slowing and that the global economy could suffer as a result.

Only it wasn’t really true. Gordon Moore, Intel’s chairman emeritus, predicted in 1965 that the number of transistors on a chip would double every couple of years. That prediction held up for decades, but it appeared to slow down as Intel became quiet about its progress. But last week, Intel disclosed that, while it took longer for the company to make its latest technological leap, it had miniaturized transistors for its 10-nanometer manufacturing at a better-than-expected level. And that meant Moore’s Law is on track.

Intel plans to shift from 14-nanometer manufacturing to 10-nanometer technology later this year. A nanometer is a billionth of a meter, and the number represents the distance between circuits in a chip. And Intel says that its manufacturing process is ahead of rivals such as Samsung, TSMC, and Global Foundries.

I caught up with Dan Hutcheson, CEO of VLSI Research, at Intel’s event. Hutcheson has been covering the chip industry for decades, and I bounced Intel’s assertions off him. Here’s an edited transcript of our conversation. 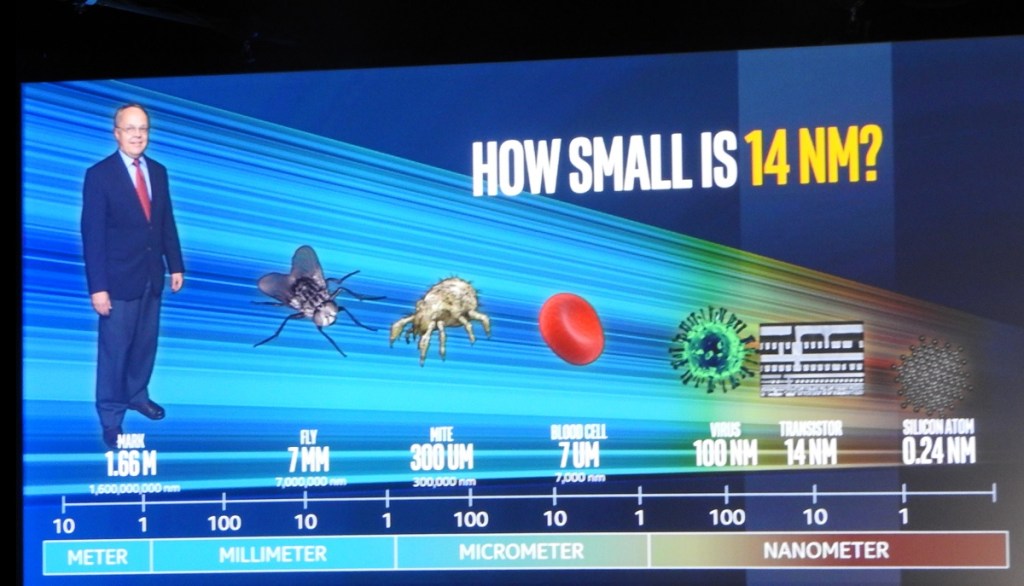 VentureBeat: What do you think of the disputes over who’s ahead in 10-nanometer manufacturing?

Dan Hutcheson: We got away from these fictitious node names. That really dates back to the ‘90s. Before that everybody used dynamic random access memory (DRAM). I don’t know if anyone remembers that, but before we used DRAM. Then, when the Japanese came to dominate DRAM—okay, we’re not in DRAM, so how do we come up with something different that applies to us? That was when the nanometer node came. Although we called them microns back then. It was a while before we rolled over to nanometers.

VB: Does it make sense as far as what Intel has said, that they have this three-year lead? That their 14 nanometer is equivalent to what everyone else is calling 10 nanometer?

Hutcheson: Oh, yes. That’s the way it’s been for a long time now, since somewhere around 40 or 65. Intel really accelerated ahead of everyone. A few years ago they got a good node ahead, one or two nodes ahead, and then they started to slow a little bit as far as specific nanometers they were using.

VB: Everyone worried about the slowing of Moore’s Law at the time.

Hutcheson: That’s all BS. That’s all just people who can’t compete anymore, so they like to go out and talk about how Moore’s Law is dead. I’ve written two Scientific American articles addressing whether Moore’s Law is dead. One of them was in 1996. Another one was in 2005, I think, or 2003. It keeps coming back as a theme. Before we decided to shrink our library, I had this paper from 1968 that said Moore’s Law was going to die. Even Gordon himself, in a 1965 paper, said he thought it would only last into the ‘70s.

VB: It came into a lot of the strategy. AMD has been saying that because Moore’s Law is slowing, Intel doesn’t have as big a lead on them anymore on that front. When they pull ahead with better design, like zen, it makes a bigger impact now. They can say Intel can’t outmanufacture them. Or that’s their argument.

Hutcheson: AMD’s advantage has always been design. There was a time—if you go back to the 130 nanometer age, AMD’s gate lengths were tighter than Intel’s. That’s not true anymore. But the slowing is a fiction. The other thing people get into is—because of the node being a convention, the way people look at Moore’s Law moved from what my density of memory was, how many transistors I could put in a chip I could sell, to what’s the half-pitch? That you can measure really easily by Rayleigh’s theorem. It boiled down to who bought what litho tool. They told you where they were technically capable at any particular point in time.

The problem is, if you and I get in a Ferrari over here at Sonoma Raceway and start driving, versus [Formula One driver] Sebastian Vettel getting in the same car, he’ll run circles around us. This is what Intel is describing today. They’re coming out and saying, “We still build faster laptops.”

VB: Qualcomm’s argument has been that they’re on such a good learning curve with smartphone chip production, which Intel doesn’t have, so that they’re moving faster while Intel’s PC business slows down. That was at the beginning of the year, when they announced their 10 nanometer chip.

Hutcheson: And everybody sort of hides behind the fact that their 10 nanometer isn’t really 10 nanometer. Just like the 20 wasn’t a real 20. 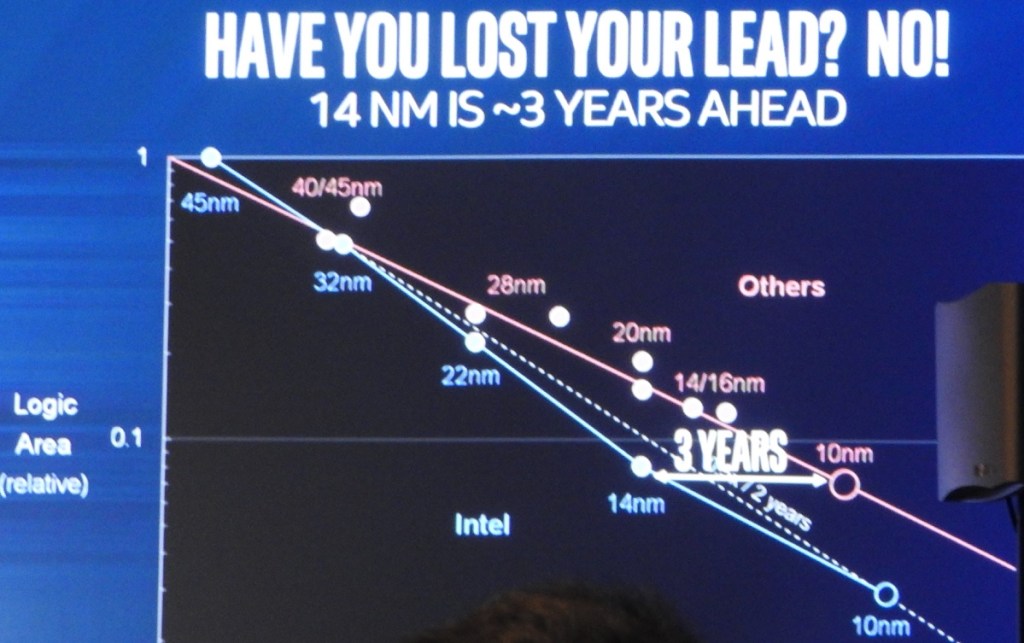 Above: Intel is on the blue path, and rivals are behind on the red path.

VB: Do things like gate length tell you that? What tells you that the most?

Hutcheson: It boils down to SRAM cell size. I’m still using—if I look at the cell sizes these guys publish at the International Electron Devices Meeting or whatever, you can see where they are. Because you can’t compare a PC CPU to a server CPU and so on, because you’re going to have different densities depending on how far you have to space the transistors because of performance or what you’re doing for low power. Also, depending on the application, how much SRAM you want to have in it. SRAM is very densely packed. The logic is loosely packed. The I/O and all that stuff is very loosely packed. Depending on your mix of those, you get a different chip density. At the end of the day, you say, “What’s the minimum cell?” This is what Intel’s been using for a while: on the cell, we can do this cell height and this cell width. But that’s not such a great metric.

The other issue we have is there’s not a new name for the new naming convention. What do you call it?

VB: For the foundry business, does it sound like they’re pretty serious? They can use 10 nanometer for it?

Hutcheson: Oh, they’re very serious about using 10 nanometer for the foundry. In the end, that’s their big advantage. How do they take their ability to merge the process and link the process to the design to get a competitive advantage?

To your point about Qualcomm saying they’re ahead, where they’re really ahead is in all the CDMA technology and the patents. Everything they have in terms of core technology puts them ahead regardless of the transistors. The transistors are just the beginning. You can make up for not having a competitive transistor in other ways. The hard part is, how do you make up for the power difference? In mobile that’s critical, because if your modem burns more power than the other guy’s, you lose. You run the battery down faster.

Above: Progress on Moore’s Law is intact, but not always steady.

VB: There wasn’t as much talk about that today, the power side of things. Is that something you need to know more about?

Hutcheson: It’s more of a dark art. They talked a bit about it, about 22 nanometer versus 10 versus 14 and why they’re bringing 22 out, to go for low power. The point to that would be, when you go for ultra low power, you really go to different architectures, a different transistor. You start from a different base point as you build up the whole design.

VB: Where they stand on 3D Xpoint?

Hutcheson: They’re two different companies, two different organizations within Intel. There’s the memory group and the others. What I suspect you’ll see in the future is possibly 3D Xpoint being integrated in a heterogeneous way, but in reality it makes a lot more sense to do heterogeneous integration of DRAM before you bring Xpoint into play.

VB: Is that what a lot of the heterogeneous packaging was about?

Hutcheson: Yeah. Basically, I need to feed the processor information. As far as getting that information into the processor the fastest, it’s SRAM, then DRAM, then flash. What’s happened is the gap between flash and DRAM has spread. Xpoint fits in between those two. My sense is they’re really not ready to look at integrating 3D Xpoint. What makes more sense is taking the DRAM from Micron and integrating it. If you look at what Micron’s been talking about, about system-in-package integration levels and embedded DRAM, that’s all going into heterogeneous packages. Someone buys the DRAM from them and they put it in with other chips.

Hutcheson: We’re still staying on Moore’s Law. If you can do 2X every couple of years you’re still on Moore’s Law. It doesn’t end. In fact, what you see is—the debate around Moore’s Law sometimes borders on pure hyperbole. People will take that chart John Chen used as a forecast, saying it was bottoming. People still reference that chart, but now they take it as history. It was a forecast. The day it was published, he was saying, “If we don’t do something, it’s going to do this.” That chart got picked up a year or two later and ever since then people have taken it and said, “Oh, it’s flattening out.”

It’s not just Intel. When you look at TSMC, they’re still clocking a doubling of density, and so is Global Foundries. But it’s become popular, this whole idea of Moore’s Law slowing.