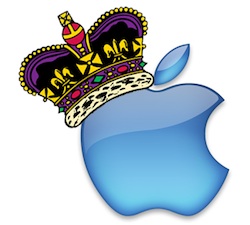 As Palm, Google, and others roll out their smartphone platforms, you might think Apple should be worried about keeping the momentum going on its iPhone. Not so, says Piper Jaffray analyst Gene Munster in a note sent out earlier today — the competition just drives more people to Apple.

The smart phone industry has effectively crowned the iPhone and its App Store the gold standard among touchscreen mobile experiences, and competitors are trying to copy the device and its software. In doing so, the iPhone’s competitors are actually promoting the iPhone …

He then goes on to compare the dynamic between the iPhone and its competitors to that between the iPod and competing music players in 2004. In other words, the iPhone is the touchscreen smartphone at the top of public awareness (even if its actual marketshare isn’t quite so impressive), so as tech companies bring more and more attention to the smartphone market, Apple benefits. The comparison would have been even more perfect if Microsoft had actually released the rumored Zune phone ….

Of course, analysts have whiffed on Apple before, particularly when it comes to guessing what the company will do next (remember when everyone was predicting the launch of an iPhone nano?). The market prediction may be relatively solid, since it’s based on existing trends, but Munster is probably getting more speculative when he talks about Apple’s deal where all iPhone users in the United States must sign up with AT&T:

We believe Apple is slowly transitioning each country into which they sell the iPhone to a multi-carrier model. In other words, we expect Apple to add new iPhone carriers in the U.S. within the next year (likely with a new product launch next summer).

After all, Munster adds, Apple has already moved to a multi-carrier model in France. Plus, there’s no denying growing anti-AT&T sentiment, which was palpable at Apple’s last Worldwide Developers Conference in June. In fact, the Wall Street Journal just published an article wondering if the strain that the iPhone has put on AT&T’s network has done more damage to the carrier’s reputation than the iPhone exclusive was worth.

All I can say is that the timing would work out pretty well for me, since my AT&T contract ends next summer, and I’d be awfully tempted to switch to Verizon …