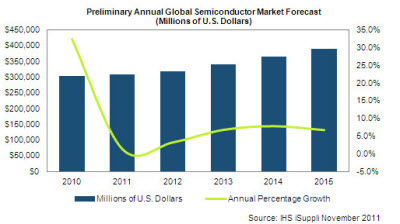 The chip industry is expected to grow only 1.2 percent in 2011, according to a reduced forecast for the world semiconductor market by market researcher IHS.

IHS forecast in September that the world chip industry would grow 2.9 percent. The industry, which provides chips for all things electronic and is a bellwether for the tech economy, faces major economic headwinds this year thanks to uncertainty in Europe and the stock market.

In the third quarter, the chip market is expected to expand 3.5 percent compared to the previous quarter. That is down from the September forecast of 4.8 percent. While the third quarter was weaker than predicted, the growth was still positive in terms of the full-year forecast. 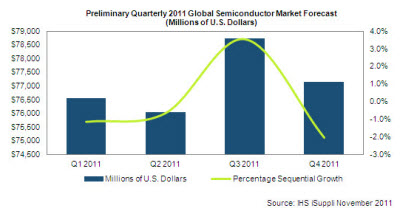 “Although the forecast of 1.2 percent revenue growth in 2011 is just barely positive, an expansion of any magnitude is significant from the standpoint of market psychology,” said Dale Ford, analyst at IHS. “Given the worsening economic environment and growing pessimism in the electronics supply chain, many market forecasters had projected third-quarter revenues would decline and pull down the results for the full year of 2011.”

Even though the overall industry is slowing, a number of chip makers are expected to have solid growth in the fourth quarter. Those include Intel, Samsung, Renesas, Qualcomm and Advanced Micro Devices. Bright spots include microprocessors, image sensors and NAND flash memory. Each segment is growing more than 15 percent this year. Sensors and actuators will grow more than 5 percent, but the memory market is weighing down the whole chip sector, with declines of 15 percent or more for different types of memory.

The electronics industry took a big hit this year in the second and third quarters as a result of the disaster in Japan. That took out about 2.5 percentage points in the second quarter and resulted in a market decline in that period.

Meanwhile, flooding in Thailand is expected to reduce hard disk drive shipments by 30 percent in the fourth quarter. That will cause PC shipments to fall short of expectations, taking a further toll on chip sales. By the first quarter, hard drive inventories will be depleted and the lost production will take its toll in that quarter. Weak economic conditions are expected to last into 2012. For 2012, chip revenue growth is expected to be 3.2 percent, and real growth won’t return until 2013.