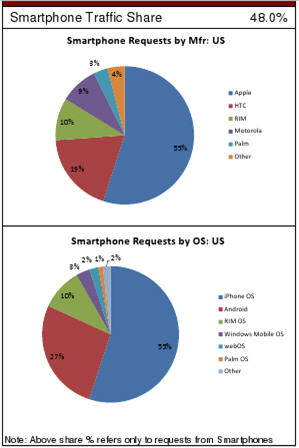 Google’s open-source Android operating system accounted for more than one in four of the smartphone ads served in November by AdMob, the mobile ad network that Google agreed to buy for $750 million six weeks ago. That’s up from 20 percent in October.

That means Apple’s iPhone, which seemed untouchable only a few months ago, has a fast-rising competitor. Apple’s share of ad requests is twice as big — 55% — but Android traffic is eating into iPhone growth, rather than being pushed aside by the iPhone as happened to Nokia.

AdMob’s metrics, to be clear, don’t say what fraction of people own Androids. Rather, they measure the number of AdMob ads requested by different models of phone through AdMob clients. Unlike Google’s search ads, which are tied to keywords, AdMob serves display ads, whose goal is simply to appear in front of as many eyes as possible.

Looking forward, it’s a safe bet that December’s Android share will be well over 30%, helped by the introduction of Verizon’s Droid and Google’s Nexus One. But wait for it — the report to watch for will be the stats for January 2010, after AdMob begins serving ads to everyone who got a new phone under the Christmas tree. 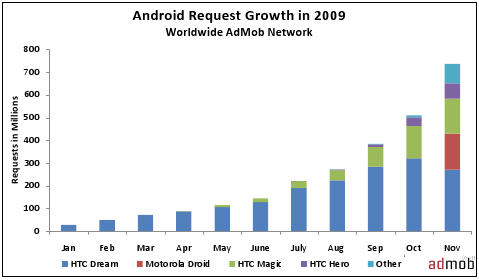