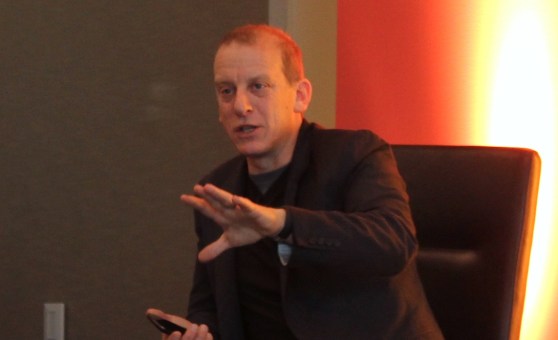 SAN FRANCISCO — Android hit its fifth birthday earlier this week, and for Android cofounder Rich Miner, the past half-decade has been pretty good.

“I don’t think that we would have done anything different,” Miner said yesterday at the annual Open Mobile Summit.

Miner was the keynote speaker here in November, 2008, shortly after Android’s launch.

“I think maybe there were some things we didn’t quite realize,” Miner said, of his perspective in 2008. Chief among them: just how quickly smartphones would grow in market acceptance. Now, more smartphones are sold every year than computers, and there will soon be one billion smartphones floating around the planet.

Android has ridden that wave better than anyone else.

Since the official debut of Google’s mobile operating system on November 5, 2008, Android has gone from an also-ran to completely dominating the market. Remember, at the time Android launched, Apple’s iPhone had already been on the market for over a year, and it looked like Google might be too late to the party, despite its impressive array of manufacturing partners. Android is now by far the most successful mobile OS, and 75 percent of the smartphones shipped in the last quarter were running Android, according to recent data from IDC.

In that time, Miner himself has gone from being the cofounder of Android (the company, which Google acquired in 2005) to a general partner at Google Ventures, the investing arm of the search giant. So he’s not directly involved in the OS any more.

“My day job since 2009 has been to seek out interesting new startups and invest in them,” Miner said, echoing the mission of the U.S.S. Enterprise.

Miner pointed to “the value destruction of RIM” as a big opportunity for startups, especially those focused on delivering mobile products and services to businesses. No major smartphone vendor is currently targeting the enterprise market where RIM had its greatest success. That, Miner said, presents an opportunity — for Apple and Google, but also for startups.

Apple is a distant second behind Android in market share, but it has the lion’s share of the profits. But what about other players? Miner was skeptical that Microsoft has any chance at all with its Windows Phone 8 OS.

“When I talk to developers, they’re certainly not asking for a third platform to develop for,” Miner quipped.

As for the so-called fragmentation issue, with the profusion of different versions of Android, Miner said it’s a non-issue.

“If fragmentation was really an issue, you’d hear a lot more people having problems,” Miner said. “Most apps work. It’s not a big issue.”

Indeed, he thinks carriers could be doing even more to differentiate the versions of Android that they install on their devices.

“I think they could do a lot more to customize Android. … I don’t think they really capitalized on that,” Miner said.

Miner acknowledged that there were security risks inherent in Google’s more open approach to delivering apps. There are bad apps that do malicious things or help themselves to your personal data, and some of these do make it into Google’s Play Store.

“Sure there’s malware, and Google continues to innovate in that area,” Miner said. “But again, security is one of the areas for people to focus on startup opportunities.”

Spoken like a true venture capitalist: There are no problems that cannot be turned into an investment opportunity.