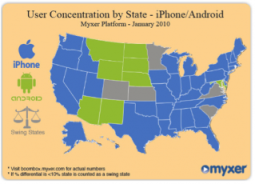 A report published Friday morning by ringtone vendor Myxer claims that among Myxer signups, “the number of registered users on the Android operating system has surpassed iPhone users in eight states, with seven of them coming from West and Midwest states including: Arizona, Montana, Nebraska, New Mexico, North Dakota, South Dakota, and Wyoming.”

Myxer’s analysis is simple: Overlay the map of registered users with a map of AT&T’s 3G wireless network coverage, to which the iPhone is tied, via AT&T’s exclusive deal with Apple. The pro-Android states are clearly parked in the holes in AT&T’s 3G footprint. 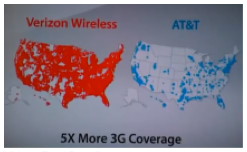 Myxer, a Deerfield Beach, Florida startup founded in 2007 and funded by $4 million from unnamed investors, competes with companies like Jamdat Mobile.