After lagging behind Apple’s iPhone for some time, Google’s Android platform is now tied for the lead spot in ad impressions on Millennial Media’s network, according to the company’s October Mobile Mix Report.

Millennial’s mobile ad network covers 73.5 million unique users, which gives it lots of data to work with when it comes to research.

Apple remains the leading device manufacturer on Millennial’s network with a 25 percent share of the top 15 manufacturers. Samsung jumped to the second spot thanks to a 3 percentage point gain, which the network attributes to the launch of its Vibrant Galaxy S phone as well as two other new devices. Motorola became the number three manufacturer with a 15 percent impression share.

Android’s growth isn’t surprising, but it will be interesting to see how long it continues its accelerated growth. I’m also not quite sure what’s at the heart of RIM’s growth, but I would wager that it may have to do with BlackBerry devices getting cheaper and becoming available as prepaid devices. 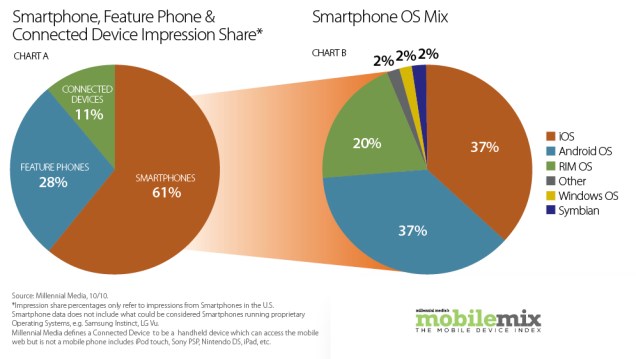