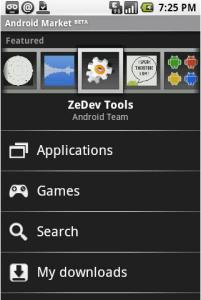 Mobile software operating system Android is coming soon, at least on one device — and that device will have a way for third-party applications to get access to users. The Google-led software initiative will offer a service called Android Market, a way to find, maybe purchase and download third-party applications (and maybe other content?). This is like what Apple’s App Store is for the iPhone and iPod. But there are some differences, according to the Android team post about it today.

Specifically, “we chose the term ‘market’ rather than ‘store’ because we feel that developers should have an open and unobstructed environment to make their content available.”

Apparently, there will be no approval process for applications, in contrast to Apple’s more rigorous selection process. Android says that in “three simple steps,” a third party developer can “register as a merchant, upload and describe your content and publish it.”

The big implication here is that Google’s manufacturing and carrier partners are okay with this concept — since they’ll be the ones running Market on their devices and networks.

Apple has deleted apps that it considers detrimental to the interests of its users, including the thousand-dollar I Am Rich app, that was just a picture of a tacky, neon-red diamond. 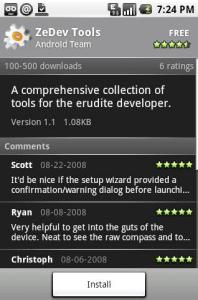 Other types of platforms, like Facebook’s social network developer platform, have been hurt when they’ve been open, even though being as open as possible is generally good for app innovation. Third party applications spammed users with unwanted invites, for example. This led to more regulation. Sure, mobile is different, but Android will have to have some sort of acceptable use policy for developers.

Interestingly, Android is calling apps “content.” Android’s software does allow for the distribution of ringtones, music, skins and other content, not just apps. So we’ll see non-app content in the market?

The service will also include a rating system, and Android plans to include a developer dashboard and analytics software (Google Analytics?) to help developers understand how their apps are doing.