Google today shared that in August 2019, Android Pie had 22.6% adoption. That means the second-latest version of Android was running on a fifth of devices after some 12 months. Google did not share adoption numbers for any other Android version, including Android 10, the latest version that started rolling out last month. Meanwhile, iOS 13 passed 50% adoption in less than a month.

The new figure comes just an hour ahead of Android Dev Summit 2019, which kicks off today in Sunnyvale, California. With over 2.5 billion active Android devices out there, Android’s distribution is useful information for anyone who makes decisions regarding Google’s mobile operating system. It’s incredibly valuable to know how widely (or narrowly) an Android version — or more importantly, an API level — has been adopted.

But the information is still outdated and incomplete. Google has not updated the distribution dashboard hosted on its Android developer website, which details the adoption numbers of its mobile operating system versions. The previous update was more than five months ago, when Google shared that Android Pie had passed 10% adoption. That update came after more than six months of no updates. Google previously blamed a technical glitch for the lack of distribution updates. The company eventually said it had resolved the issue and promised to keep the dashboard updated, but admitted that it would be closer to a quarterly cadence than a monthly one. Clearly that didn’t happen.

Instead, Google appears to be issuing updates when it has good news to share. We likely won’t see the latest numbers until Google can conclude that Android 10 adoption is beating previous versions.

Google releases major Android versions on an annual basis. Every new release brings an expectation for faster updates, but the wait is excruciatingly long. Google has tried to both change the importance of the annual updates and speed up their arrival. With Android ICS, the company released Google Play Services, which it uses to push various features and improvements to Android devices without requiring a full operating system update. With Android Nougat, the company started releasing monthly security updates. Android Oreo introduced Project Treble, which modularized the mobile operating system so that it is easier to update. Since Android Pie is the major release that succeeds Android Oreo, it’s the first real test for Google’s biggest attempt to speed up updates. Every device that shipped with Project Treble enabled had the potential to get Android Pie (and Android 10) more quickly.

Predecessors Android Nougat and Android Oreo both took 10 months to pass 10% adoption. Android Pie passed 10% adoption in about nine months. In May, Google said this indicated that Project Treble is working. 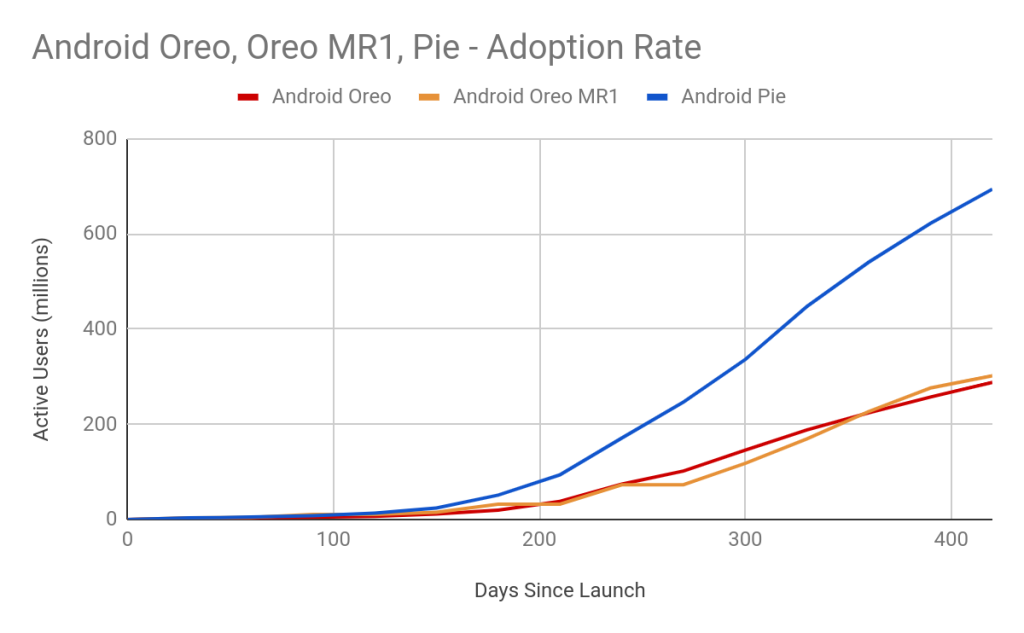 Now, the company has come back with more data. In July 2018, right before Android Pie launched, Android Oreo had 8.9% adoption, Google claims. (Google is conveniently omitting that Android Oreo had 12.1% adoption later that month and 14.6% in August 2018). In August 2019, just before Android 10 launched, Google shared today that Android Pie had 22.6% adoption. “This makes it the largest fraction of the ecosystem, and shows that Project Treble has had a positive effect on updatability,” says Iliyan Malchev, Google’s Project Treble architect. Almost 700 million users on Android Pie is impressive, even if it’s not a big fraction overall.

Android Pie, Android 10, and beyond

With Android Pie, Google made more of an effort to collaborate with silicon manufacturers. This has reduced the average time to upgrade by more than three months, says Malchev. Google expects “to see upgrades from Android 9 to Android 10 noticeably sooner this year,” he added.

Malchev also offered other examples of progress. He said Xiaomi and Essential issued software updates to Android 10 on the same day as Pixel phones got it. Other phone manufacturers started Android 10 beta programs sooner than previous releases, including OnePlus, Nokia, and Samsung. The likes of Asus, LG, Motorola, OPPO, Realme, Samsung, Sharp, Sony, Transsion, and Vivo have committed to updating some of their devices to Android 10 by the end of the year.

With Android 10, Google introduced Project Mainline, which delivers “important code changes” to specific internal OS components directly via Google Play. “Project Mainline is to the core of the Android OS what Project Treble is to its foundation,” according to Malchev. Android 10’s update improvements won’t be seen until Android 11 arrives in 2020.