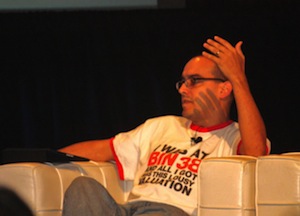 A bunch of high-profile angel investors defended the idea of keeping valuations low and selling companies early at the TechCrunch Disrupt conference today in San Francisco.

TechCrunch Editor Michael Arrington, who moderated the panel, had previously criticized some angels for funding “dipshit companies” that think too small and aim to be acquired by Google for around $20 million. But those exits actually make sense, said 500 Startups’ Dave McClure (pictured). After all, he said, a medium-sized exit right now is under $100 million, and a $20 million exit can still “meaningfully change the world and change your life.” For example, he said that Facebook’s acquisition of FriendFeed (for a reported $50 million) will eventually seem like “a terrific exit.”

And that’s why it can be useful for an entrepreneur to keep the valuation low — that keeps their options open for an early exit. Mark Suster of GRP Partners compared the decision to getting on a train. If you get a high valuation, then you’re on an express train, which means that you have to ride that train all the way to the end, in the hope of a big exit. With a lower valuation, you have the option of getting off early.

Arrington kept pushing on this point, asking if these investors would really back entrepreneurs who came into meetings saying they wanted to be acquired by Google for $20 million. “Godfather of Silicon Valley” Ron Conway of SV Angel said those issues barely come up.

“If they talk about the liquidity more than three, more than one minute, that’s a negative mark on that entrepreneur,” he said.

Of course, the recent debate about alleged collusion among “super angel” investors also hung over the panel, but most of the speakers declined to elaborate on they comments that they had already made. Lowercase Capital’s Chris Sacca said it was a “misunderstanding” and that continued discussion is “totally a waste of time.”