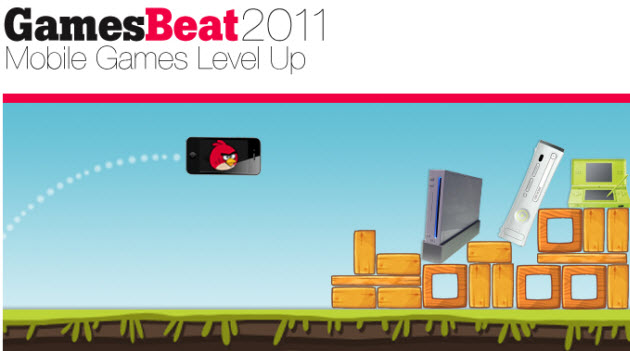 It’s hard to say anything about mobile gaming these days without discussing Angry Birds, the bird-slingshotting game that has been downloaded more than 200 million times. That’s why we’ll have an executive from Rovio, the maker of Angry Birds, at this year’s GamesBeat 2011 conference on July 12-13 in San Francisco.

Wibe Wagemans, whose title is Humming Bird for Rovio, leads the company’s global brand advertising and analytics. He will be flying in from Finland to speak in a fireside chat with his interviewer and investor, Rich Wong, a partner at Accel Partners. Accel led the $42 million investment in Rovio back in March in a deal that we viewed as a watershed moment for mobile games.

Their fireside chat is entitled, “Angry Birds: how to build a mobile hit into a big entertainment franchise in movies, flagship stores, and attract a billion fans.”

Wong and Wagemans will talk about how Rovio plans to take the Angry Birds franchise to the next level as an entertainment property. Wagemans joined Rovio earlier this year. Prior to that, he oversaw international marketing for Microsoft’s Bing search engine, for both mobile and PCs. He also served eight years at Nokia as a senior marketing executive, reporting to the business group executive board. He has also held marketing and sales positions at Gillette. His job is to turn Angry Birds into an even bigger cultural phenomenon than it already is.

Originally called Relude, Rovio began as a mobile game firm, started in 2003 by three students from the Helsinki University of Technology: Niklas Hed, Jarno Vakevainen and Kim Dikert. They had participated in a mobile game competition sponsored by Nokia and Hewlett-Packard. Peter Vesterbacka, then at HP, was one of the judges, and he suggested the trio start their own mobile game company. They did so and got Digital Chocolate to publish the game, King of the Cabbage World, on cell phones. They started doing work-for-hire games such as Need for Speed Carbon for Electronic Arts. Mikael Hed joined them as CEO in early 2009 and steered them toward making internally produced games they could own. They hired subcontractors to do their work-for-hire jobs so they could free a team to focus on new iPhone games.

They wanted to exploit the iPhone’s hardware, such as its touchscreen, and create memorable characters. They conceived Angry Birds — where the player would slingshot birds with bushy eyebrows at green pigs in fortresses — and targeted the game at a mass audience. They wanted to get the slingshot game mechanic just right and focused on every detail, such as the animations of the birds crashing into the pig fortresses and the laughter of the pigs whenever you fail to demolish them.

They launched the game on the iPhone in December, 2009, via mobile game publisher Chillingo. It caught on in Finland first and then became a hit in Sweden. It hit No. 1 on the App Store in the United Kingdom and then made its way to the top of the charts in the U.S. The title spread through social media, and Apple featured it in the App Store. People began tweeting about Angry Birds every minute. Now the game has catapulted into the stratosphere in numbers of downloads.