Joe Barnes didn’t have enough data to know if esports and Bud Light were a good mix. Market watches like Nielsen are paying attention to esports, but they don’t have nearly as much data as they do for mainstream media such as television.

But Barnes, the head of experiential marketing at Bud Light, dove in anyway. He brainstormed with advisers like Stuart Saw, a senior vice president at the marketing agency Endeavor, and they came up with activations for games such as Overwatch. In one such activation, fans had to push a “payload” of beer a certain distance, just as players have to shoot their opponents and move a payload across a map during esports matches for the Overwatch League.

The result is that Anheuser-Busch has 70% share of the social sharing in beer for esports. There wasn’t enough data, but it was enough for Barnes to act and get his brand in front of the elusive millennial audience that doesn’t watch traditional media.

Stuart Saw: I head up esports at Endeavor. At Endeavor we work across the field. We work with brands like AB InBev as their strategy advisors, but then also we work in production. We work in merchandising and licensing and general consulting across the space. We work across the broad spectrum of esports.

Joe Barnes: I’m with Anheuser-Busch. I’m the head of sports marketing for the Bud Light brand. That oversees esports, but in addition to that it oversees the NFL, NHL, and NCAA.

GamesBeat: We saw some good examples of Bud Lite activation. How do you describe how you work together to pull these things together?

Barnes: Endeavor is our strategy agency for esports, and also for the NFL and hockey and others. This past weekend is a great example of how we use our brands to activate within esports. Especially with a non-endemic brand, it’s a huge challenge to break through. We’re not going to make you faster or give you better posture when you’re playing, but we are beer, and we can do a lot of fun things.

The insight that we used for this payload activation is, how can we bring the video game to life for this community? It’s a virtual community that we want to bring together in real life to do things — for us, most important, to drink beers together. We threw out there to the community that we won’t serve beer for the fan fest at the Overwatch League grand finals unless they all come out and escort the payload together.

We needed 100 to come out. We had about 300. We also had some influencers from the league. We had Zedd. We had former Eagles player Brian Westbrook. They all showed up to move this payload, which was really exciting for the fans. Then they also got to drink plenty of Bud Lights at the fan fest before going to enjoy the grand finals.

GamesBeat: Stuart, were you helping to develop this?

Saw: Certainly. In Endeavor’s role, we have a sporting team that will ideate with Joe and then work to unlock opportunities for them. We’ll do this across space, both on a digital level and then on a physical level at events. 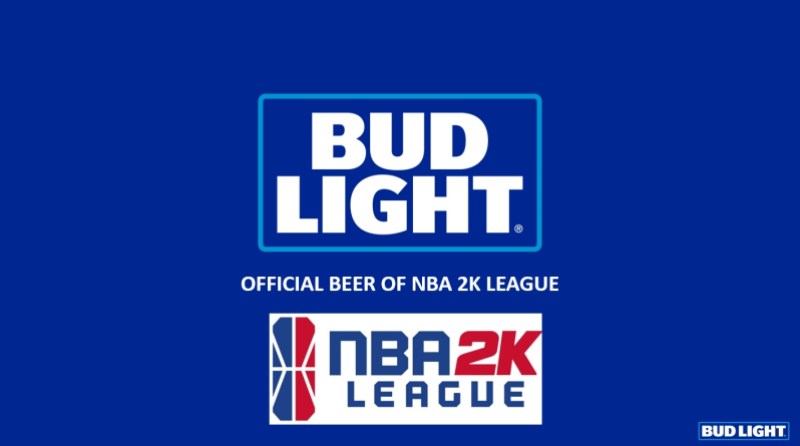 Above: Bud Light isn’t messing around when it comes to esports marketing.

GamesBeat: Joe, you mentioned you had a 70 percent share of social voice. Can you talk about that?

Barnes: It’s super important to us as a brand in the esports space that our consumers talk about us. It’s a digital community. It’s much bigger than just the traditional logo slot that we would have with the NFL or MLB stadiums. We need to break through. We need to be with these fans in their own space.

A good metric we look at is social conversations. Throughout the year — and again, we had a nice shout-out before — we had the Bud Light happy hour that we do weekly. We’re putting out content on social to get people to tune in, and fans in turn are talking about that. From our data, what we pulled back is that within the beer space, we’re above 70 percent, which is extremely dominant. We’re happy with the results, and the community is paying us back by talking about us and engaging with our brand, which is the dream scenario for a marketer.

GamesBeat: We did a Q&A earlier where you talked about how you would like more data in this space, but you also had enough data to act. You moved fast, and that’s how you got to that 70 percent share over the other beer makers.

Barnes: Data is evolving in the space. We’re a data-based company. We like to use data to form insights, and then we can act on that. We’re working with Stuart and Endeavor. I’ll let him touch a bit more on how we can get better data, more refined, and act on that in a better way.

Saw: One of the challenges is data back. For a lot of the activations, the Twitch dashboard we all rely on is pretty limited in what it can provide. We have a group within Endeavor called Endeavor Analytics, and what they pulled and were working through here–they went through various sources that showed the challenges of really sizing the market.

In doing this, we’re going to start with looking at the ranges and all of the groups that play in them. Then we’ll compare that to traditional sports to show you how much easier that is in traditional sports, because that’s a much more mature data market. Here you can see the fan counts within esports. You have a range of fan counts, from [name – 5:40] Index saying 30 million people in the U.S. audience, versus 90 million on the other end with Nielsen. You have a variety of groups that sit in the middle of what is a giant range as we try to sum up how big esports really is in the U.S. That’s a real challenge for brands.

In sports you can see that each of these agencies that create this data, they have their own metrics and their own way of doing it, but you can see that in the three sports on the bottom, is pentagon is pretty evenly spread out. They’re consistent in how they level out. In esports that variance tells you that there’s still a lot of development that needs to go on. There’s not a lot of data being shared back with these research groups. They play an important role for brands as they evaluate the space.

This is how heavily the female audience weights in the space. Again, massive variance across these. The audience age piece, as MonteCristo touched on for Bud Light, very important to make sure that we’re hitting an over-21 audience. Again, you can see a massive spectrum as far as how much of the audience is under 30. That varies from as much as 90 percent on the Nielsen esports report to as low as 30 percent on MRI-Simmons. 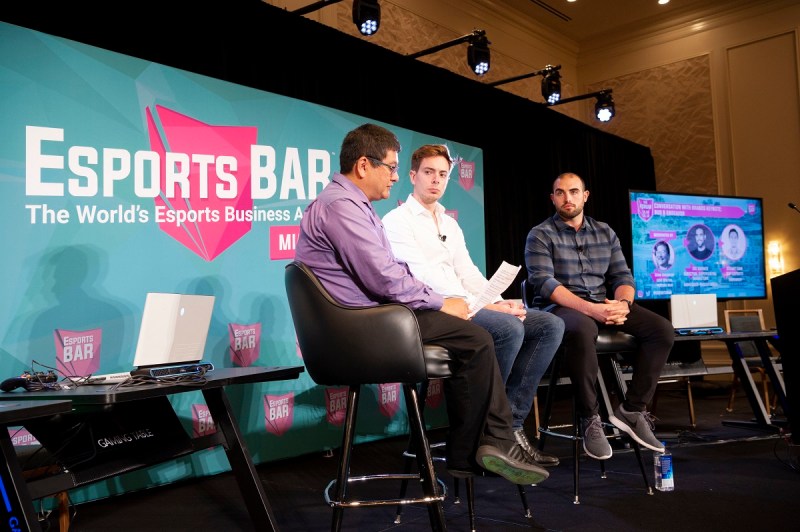 Above: Left to right: Dean Takahashi of GamesBeat, Stuart Saw of Endeavor, and Joe Barnes of Anheuser-Busch.

This is a real challenge. This is something all brands face as they look at the space. Brands are coming in with a certain level of experience that they get from advertising in sports and other spaces. They come to esports and ask, “What can we do?” We turn around and say, “Well, this is what we think it looks like? Here’s a Twitch dashboard.” It doesn’t really cut it.

It’s very important that we as an industry continue to level up and continue to press all of those we market with to press back. The Overwatch League has done a good job with trying to level up the data they get back from Twitch, but that’s a platform we need help from as far as getting more data.

GamesBeat: In some ways that’s a bit of a mess, but Joe, do you see something actionable here, where there’s enough information for you?

Barnes: On that particular slide, no. For this one, the metric we never would look at is under the age of 30. For us, it’s what about 21 and over? That presents its own challenges. The most popular game in the country and the world skews about 70 percent under 21. There are a lot of challenges that come with the space. Having the rate data helps us be able to get these deals done through our legal teams, and then we can act on that.

GamesBeat: The Twitch channel came up earlier. That’s one way you can do that.

Barnes: That’s a lever we’re able to play with, sure, our Bud Light Twitch channel, which is a huge asset for us. We can age gate that, so that only 21+ can enter, which helps us from a regulatory standpoint. Also, making sure the messaging is appropriate for the audience watching.

Saw: What I’d say to add on to the success of the Bud Light Beer League and the Bud Light Twitch channel, the audience numbers they’re pulling in on recurring weekly shows are growing on a week-on-week basis to numbers that you just don’t see for branded content. The Bud team has proved out that if you come with content that is additive, people will go to it. This is a content-hungry audience. The average esports consumer is consuming more than 100 minutes of content per day. If you can add to that experience, add something they’re not getting elsewhere, they will come to you, and as a brand you can be very successful.

Barnes: That’s 100 percent it. As a brand marketer, what better tool could you have than people coming and wanting to consume your content? We pay hundreds of millions of dollars a year to put our content in front of them where they don’t want to see it. Instead of being a brand interrupter, we can bring value back to the fans.

To Stuart’s point, we’re peaking at 5,000 concurrents with some of our content that’s coming on a weekly basis. That number continues to increase because fans like what we’re doing. They like the value we provide back to them. We value them as consumers, as fans of esports.

GamesBeat: When different parties come and question you, do they ask about the hype around esports? Do you have a particular piece of data that you respond with? “Yes, there’s hype, but look at what’s really happening with audiences here that should tell you there’s something here that we should care about?”

Saw: First of all, we’ll use the engagement figures. We’ll take that data and then we’ll take the engagement figures — how many people are available to these advertisers on TV? How much time are they spending on Twitch, on YouTube, on the platforms? These pieces are just saying, “Look, it’s not just hype.” Yes, we’ve all gotten over the idea of, “People want to watch video games? That’s crazy! These people are going to a stadium? That’s crazy!” We’ve all moved past that to, “What’s the actual engagement?” and as we just talked about with Joe, how you can capture that engagement as a brand.