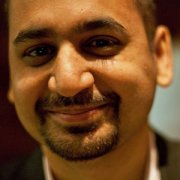 Anil Dash is a popular technology blogger who worked at blog software maker Six Apart before becoming director of Expert Labs, a technology think tank. He proudly counted more than 18,000 followers on Twitter.

Then, in October, Dash’s Twitter account, @anildash, was added to Twitter’s Suggested User List, changing his life – on Twitter, at least — forever. The list is a collection of a few hundred Twitter users the company hosts on its Find People page. New Twitter users seeking people to follow need only click a checkbox next to Dash’s photo and name. Other Suggested Users include New York Times columnist Paul Krugman, singers the Dixie Chicks, and JetBlue Airways.

Suggested Users is notorious for sending hundreds of thousands of new followers to anyone who gets onto the list, no matter how obscure or non-famous they are. Dash now has 268,369 followers — whoops, make that 268,422 and still climbing.

The list has caused many users to complain that they’d spent years amassing a 20,000 person following, only to look irrelevant next to anyone lucky enough to become a Suggested User. Twitter co-founder Biz Stone told reporters in November that the list would be “going away,” replaced by a programmatically chosen list of popular accounts rather than the current staff-selected favorites.

Dash, a user experience expert, documented his own experience in a long post on his personal site. Here’s a summary of his findings, for which I interviewed him on the phone.

250,000 new followers did not increase Dash’s retweets, replies, or clicks. “Being on Twitter’s suggested user list makes no appreciable difference,” he wrote, in how much attention he got back.

It’s tempting to theorize that the Twitter members who added Dash from the Suggested User List are classic Internet lurkers, who read the Net but don’t otherwise participate in an observable way. That theory gets shot down by the fact that whenever Dash links to one of his own blog posts, the clickthroughs to his blog are about the same now as they were when he had one-fifteenth as many followers. It seems that his original 18,000 had sought him to interact with him. Those who added him via Suggested Users may not be reading his tweets at all.

The same non-response happened, Dash says, to the people who operate the @creativecommons and @starbucks accounts. They’ve been added to Suggested Users, for which they got a few hundred thousand new followers who don’t seem to do anything.

Twitter users add Dash blindly, not knowing who he is. “Once in a while I get confused replies from people asking who the hell I am,” Dash reports, “but for the most part they don’t interact with me at all.”

Too many followers drown out real friends. It sounds cool to have a quarter million followers. But with another signing up every few seconds, Dash had to turn off Twitter’s notification emails. As a result, he didn’t realize a cousin had begun following him.

Dash’s conclusion: “Nobody really has a million followers.” Getting a million people to click the Follow button, he told me, doesn’t mean that there are a million people paying attention to your tweets. The lack of uptick in retweets and replies could be explained via a Lurker Nation theory, but the lack of clickthroughs to tweeted links suggests it’s more likely his new mob of followers aren’t reading Twitter at all.

Dash compared his exploding follower count to newspaper subscription stats. “When I worked at the Village Voice,” he said, “we would say Michael Musto had a million readers, but for all we know he was lining the bottom of a birdcage.”