Anki has created one of the most popular toys with its Anki Overdrive robotic cars. And now it is expanding its selection of vehicles with the unveiling of its robotic Supertrucks.

These are app-controlled toys with enough artificial intelligence that they can drive themselves around a track. You can use the app to control actions such taking over the truck and shooting rockets at other players’ cars. The San Francisco company hopes that Anki Overdrive’s latest trucks will further convince consumers that its A.I. — the product of more than six years of research — will deliver a high-end and continuously upgradeable experience for people who want more than just toy cars.

The first product that Anki launched in October 2013, Anki Drive, had an oval race track with sensors built into it. The track’s sensors could detect where the cars were at any given time, and the A.I. in the cars was smart enough to drive better than a human could. You controlled your own car with an iPhone, but rather than fully drive it with the touch screen, you could control the car’s speed and whether to fire its weapons at another car. The cars would all race around the track themselves, turning at the perfect time. You could roll up the track and spread it out on any floor. Anki updated the product in 2015 with Anki Overdrive, which had a wider variety of race tracks, with turns, intersections, and jumps.

Anki has created new battle rigs, Freewheel and X52, which are trucks that are nearly triple the size of other Anki Overdrive Supercars. Those Supertrucks will also introduce powerful new weapons and game modes that will test players. The Freewheel and X52 will be available in the US for $60 starting October 3, 2016. Fans can pre-order the two Supertrucks on the Anki web site today.

The Supertrucks were created by Hollywood car designer Harald Belker, a designer whose work has appeared in films such as Minority Report. 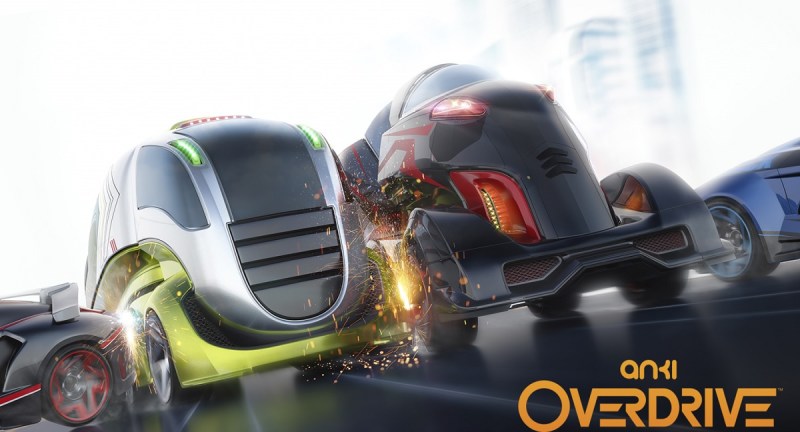 Each Supertruck comes with new weapon options including X52’s exclusive “Pulse Ram”, which will blast opponents off the track, and Freewheel’s “Gravity Trap” that will disable opponents’ Supercars, causing them to lose all control. I tried out the trucks in a Takeover battle with my kids. We had fun driving cars, taking over the truck, and then driving the other cars off the track.

In Takeover, players start each match in their Supercars. Anyone that can break through a Supertruck’s defenses will take control of the vehicle to attack their opponents until another player disables them and takes command of the big rig. This mode was a lot of fun.

“The new robotic Supertrucks deliver a whole new level of play to the Anki Overdrive universe that will give players more content and allow them to rethink their gameplay style,” said Boris Sofman, cofounder and CEO of Anki. “Our fans have proven to be incredibly creative and strategic in how they build out their tracks and how they play; we can’t wait to see what they do with these Supertrucks.”

He added, “The introduction of the new vehicles is part of our on-going mission to support, update and rollout features, both on the software and hardware side, that build off the core robotic battle-racing experience.”