Data on startups and venture capital financing in so-called second- and third-tier startup hubs across the midwestern and southern United States is fairly spotty. There’s even less data available on how these cities are doing compared to places like Silicon Valley when it comes to funding a more diverse array of startups, including those founded by women. But a study out today on the state of venture-backed, female-founded startups in the U.S. features geographic data Heartland startup leaders might want to take note of.

The study, from the Center for American Entrepreneurship, looks at how many female-founded startups reached significant funding and exit milestones over roughly the past 20 years. The study defined a startup as “women-founded” if the company had at least one identifiable female founder. Data was gathered from PitchBook.

The study first looked at the number of startups in the U.S. that raised their first round of VC financing between 2005 and 2017. Just 16 percent of those startups had a female founder. However, the share of female-founded startups that were able to raise a first round of funding has improved over time — climbing from just 7 percent of the total share of first financings in 2005 to 21 percent in 2017.

“Women are [still] severely underrepresented in venture-backed companies, when compared with a whole host of other benchmarks,” the report’s author, Ian Hathaway, told VentureBeat. “But things are improving rapidly, and steadily.” The study also found that most female-founded startups that were able to raise a second or third round of capital within three and five years, respectively, and that eventually went public, did so at about the same rates as startups without a female founder. The study did not, however, compare the size of the rounds raised by startups with and without a female founder.

In Ann Arbor, 29 percent of startups that secured a first round between 2005 and 2017 had a female founder, compared to 16 percent nationally. Between 2016 and 2017, that number was 58 percent, compared to 21 percent nationally. In Memphis, the share of female-founded startups raising a first round of VC was 20 percent and 45 percent, respectively, while in Boulder, it came in at 19 percent and 41 percent, respectively.

Bigger cities — like New York City, Los Angeles, Boston, and San Francisco — also had consistently higher percentages of female-founded startups raising their first round of capital than the national average. The only major startup hub that performed below average was San Jose, where just 12 percent of startups with a female founder secured a first financing over the past 12 years. 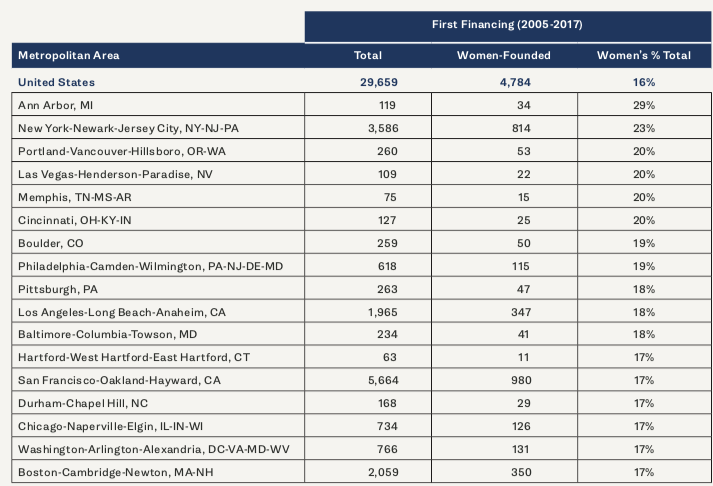 Above: The metro areas with the largest share of “first financings” secured by women-founded startups.

It’s worth noting that the total number of startups raising venture capital in Ann Arbor, Memphis, and Boulder is small to begin with. In Ann Arbor, for example, just 119 startups raised their first round between 2005 and 2017, making it difficult to compare these cities to larger startup communities.

Hathaway says it’s difficult to say without further research why one city might have a higher than normal share of female founders securing venture capital. It could be because more female investors are located in the region, or because the city supports a sector that historically includes a larger share of companies founded by women. Hathaway’s research points to consumer products and services, health care, and software as being among the industries with a larger share of female founders raising venture capital.

And startup communities can take steps to create a more hospitable environment for female-founded startups. Research has shown that VC firms with female partners are more likely to invest in female-founded companies, so local VC firms can lead the way by hiring and promoting more women. Creating mentorship programs and peer-to-peer support groups for aspiring female entrepreneurs can also help women build the type of strong network that comes in handy when it’s time to raise funds.