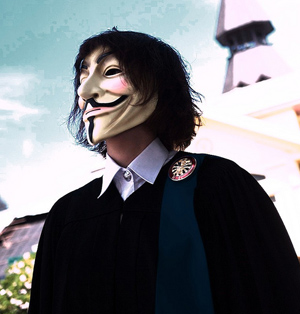 Updated 6:24pm with statement from Anonymous.

Hacker collective Anonymous has hacked the Department of Justice and Universal Music‘s websites to protest the government’s decision to shut down the popular Megaupload file-sharing site.

The Department of Justice’s website has been intermittently down and up in the past hour, and we can only imagine hackers and government agents fighting for control like a scene out of a movie. Universal Music’s homepage has been down for the past hour as well.

The DOJ indictment against Megaupload alleges that it is connected to a vast criminal enterprise has caused more than $500 million in harm to copyright owners. If convicted, the company and its executives could forfeit $175 million in property, including 15 Mercedes, a Maserati, a Lamborghini, a Rolls-Royce with the license plate “GOD,” and a huge pile of computers and large-screen TVs. Four people, including Megaupload founder Kim Dotcom, were arrested earlier today in New Zealand, while three others are unaccounted for.

Anonymous has a history of attacking government and business websites. Recently Anonymous made headlines for hacking into Stratfor’s website and database, stealing credit card information and other sensitive details. Anonymous was also angry earlier this week about SOPA legislation in Congress, and targeted media executives like Sumner Redstone, head of Viacom.

Update: As the dust settled, Anonymous released a statement claiming that it took down the Department of Justice, Universal Music’s website, the RIAA, and MPAA. The statement also includes personal information about MPAA chief executive officer Chris Dodd, including two home addresses, phone numbers, as well as information on his wife, and children’s names and ages.

The statement reads, “We Anonymous are launching our largest attack ever on government and music industry sites. Lulz. The FBI didn’t think they would get away with this did they? They should have expected us.”

We’ve seen RIAA and MPAA websites intermittently not load, but we have not seen whitehouse.gov taken down as of yet.

Some recent tweets from the @AnonOps account can be viewed below: 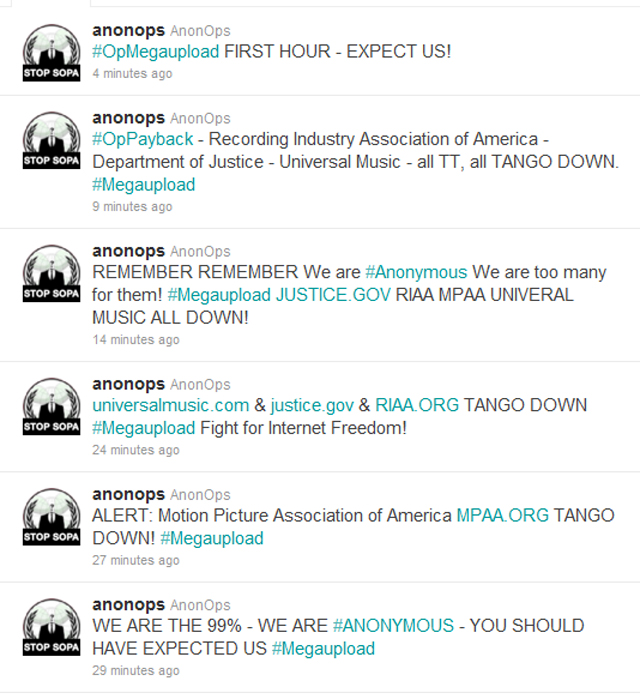