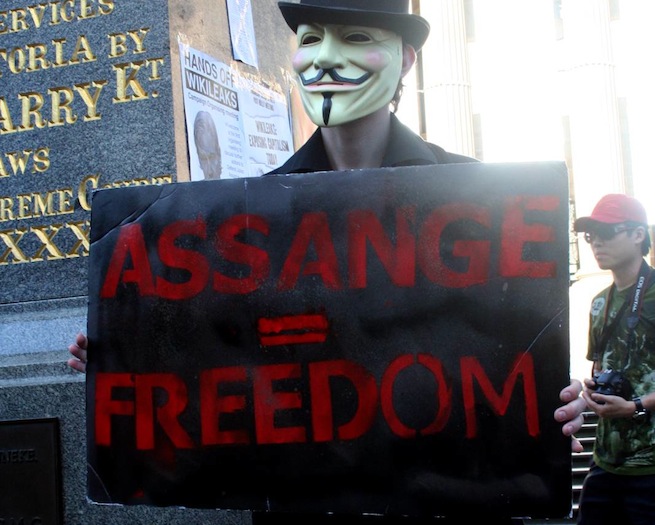 Hacker group Anonymous targeted United Kingdom government websites today in a show of solidarity with Wikileaks founder Julian Assange, who is holed up at the Ecuardorian embassy in London, hoping to flee the U.K. for fear of being extradited to Sweden and then the United States.

The hacker collective, famous for using distributed denial of service attacks to make a political point, allegedly attacked the U.K. Justice Department website, along with the British Prime Minister’s website “Number 10.” Other reports indicate the group has also attacked the Department of Work and Pensions. Anonymous used the hash tag “#OpFreeAssange,” referencing the founder of Wikileaks who is supposed to be under house arrest in the U.K. for sex-crime allegations in Sweden.

Earlier today, one Anonymous bullhorn on Twitter, @AnonIRC said, “The website of the UK Ministry of Justice is down: http://www.justice.gov.uk/  #OpFreeAssange”

Another, @YourAnonNews, tweeted, “The second victim seems to be offline –> http://www.dwp.gov.uk/  #OpFreeAssange #Anonymous. Gov. of UK Expect Us!”

After being arrested and let out on bail, Assange escaped to the Ecuadorian embassy before authorities could extradite him to Sweden. The Latin American country granted Assange political asylum last week, saying his human rights were in danger. Officials in Ecuador spoke with Sweden but were not able to get assurances that Assange would not be extradited from there to the United States, where he faces bigger charges for the leak of many U.S. diplomatic cables in 2010.

As of now, the U.K. Justice department website is still down, though Number 10 and the Department of Work and Pensions websites are up.

This morning Assange gave a speech from a balcony at the Ecuadorian embassy. He urged the U.S. to end its “witch hunt” against Wikileaks. He said that the U.S. is at a juncture: “Will it return to and reaffirm the revolutionary values it was founded on or will it lurch off the precipice, dragging us all into a dangerous and oppressive world in which journalists fall silent under the fear of prosecution and citizens must whisper in the dark?”