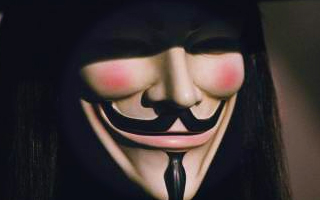 The loose collective has been linked to a variety of hacks and protests in recent months, from the disruption of the Syrian Defense website, attacks on the Church of Scientology and more recently the San Francisco BART train system. Today it turned its invisible head toward Texas.

The attack is being conducted, it appears, as revenge for the “Paypal 14,” a group of Anonymous hackers who were arrested as suspects in connection with a string of Paypal attacks. The Paypal attacks were themselves executed in a spirit of revenge, that time relating to the WikiLeaks imbroglio that occurred between late 2010 and early 2011.

Anonymous blamed the publication on corruption in the Texas police force, saying in a statement on the defaced website, “Lewd jokes? Check. Racist chain mails? Check. You lost your radio license? Lulz. Playing on the fears of voters? Check. But we already figured that.”

“For more than a month,” Anonymous continues, “we have been lurking their emails, law enforcement portals, and records and reporting systems… Thousands of documents are available on Tor hidden services and bittorrent and include several dozen FBI, Border Patrol, and counter-terrorism documents.”

But as a person who identifies with Anonymous said, “This will only serve to distract from the real issue: the 14 ‘anons’ being arraigned in court today.”

The real issue for Anonymous today is the arraignment of fellow hackers in the WikiLeaks case, not a racist e-mail chain. Sure, this brings attention back to the Anonymous forefront, but allows their real agenda to fall dark.

Because of the lack of organization, there seems to be an issue pointing their pistols in the right direction. Which begs the question, can sheep do meaningful things without a shepherd?