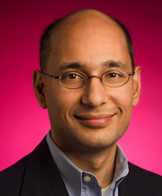 Salman Ullah, Google’s VP of corporate development, has left the company to found a venture firm called Copper River Partners, we’ve learned from a source. Ullah’s LinkedIn profile confirms he is an “owner” of the firm.

Ullah has been a public face of Google’s acquisition efforts, speaking at conferences as recently as August about what Google looks for in companies it considers for acquisition: “crazy” but good ideas, proven monetization, engineering talent, etc. His position at Google no doubt has given him good insight into which companies he should be putting his new firm’s money into (perhaps even to turn around and help sell them to Google later?)

This is the latest in a string of top Googlers that have been leaving the ‘Plex for the richer pastures of startup life. Already, this month, we’ve reported a long line of others walking out. There’s Kevin Scott, a former engineering manager for search and advertising who left to manage the technical infrastructure at mobile ad company AdMob. There’s former Google Health head Adam Bosworth, who left to work on his own startup, the guys behind FriendFeed (who were the first to flirt with the VC dark side), and more big guns going to Facebook: all-star engineer Benjamin Ling recently joined finance/dealmaking wizard Gideon Yu.

We’ve asked Ullah and Google for confirmation and are waiting for their responses.

Update: Google spokesman Jon Murchinson has just responded, as follows: “Salman has advised us that he will be leaving Google next month to start a venture capital firm. We thank him for his significant contributions over the past three years as head of our corporate development group and we wish him the best.”