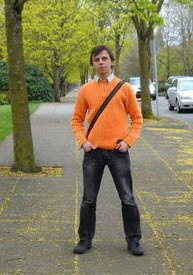 Microsoft confirmed to the Washington Post that Karetnikov worked at the company for nine months. He was reportedly arrested on June 28. U.S. law enforcement officials said that there was insufficient evidence to charge him with a crime and so he was held on the immigration charges before being deported on Tuesday.

On Karetnikov’s Facebook page, he lists his current city as Redmond and says he works at Microsoft and a company called Neobit. He graduated from graduate school at St. Petersburg State Polytechnic University in 2009. He does not list spying under his “likes and interests” on the Facebook page. It’s quite odd for an alleged spy to have a Facebook page, but the pattern of recently detected spies was to hide in plain sight.

Karetnikov was evidently in the early stages of spying and had likely obtained no information, a law enforcement official told the Washington Post. One of the other Russian spies arrested, Anna Chapman, ran an online apartment finder web site. Clearly, companies such as Microsoft have sensitive information and could be targeted by spies of countries that want to gain competitive advantages in technology.