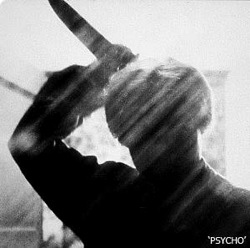 Most newspaper-industry watchers know that online classified sites, particularly Craigslist, have dealt a major blow to newspaper revenue. Now a new study from the Pew Internet and American Life Project does a good job summarizing the shift: Between 2005 and 2009, the number of adults who have used online classifieds more than doubled, from 22 percent to 49 percent. At the same time, newspaper classified revenue dropped from around $17 billion to $10 billion.

That sounds pretty dire, and it’s hard to imagine the trend reversing anytime soon. So why isn’t this coming up more often in discussions about the Death of Newspapers? Well, it’s part of the rhetorical slight-of-hand that newspaper moguls like to employ while they’re whingeing about how no one’s willing to pay for their valuable content. They love to make it sound like making articles available free online is what killed newspapers. After all, then the problem is freeloading readers, news aggregators, and blogs. But in the case of classifieds, newspapers are getting trounced by a product that’s pretty much better and more efficient in every way, which casts them in a much less sympathetic light. Which just underscores the point that the industry needs to redouble its efforts to find a new model, rather than preserving an old one that was bloated and inefficient in many ways. 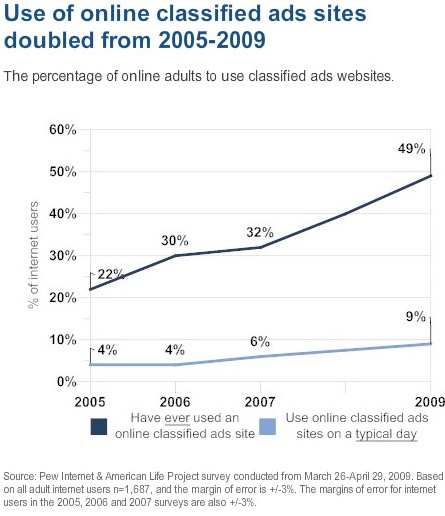 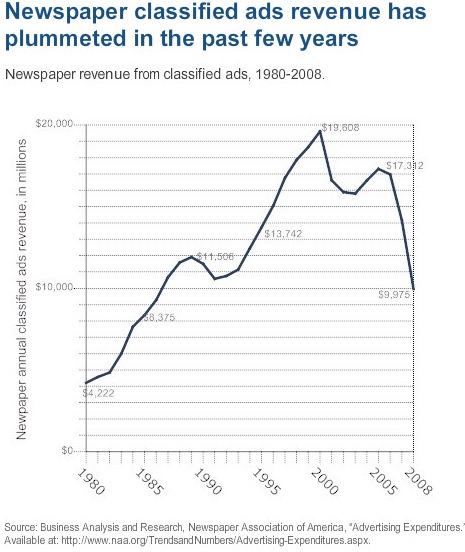