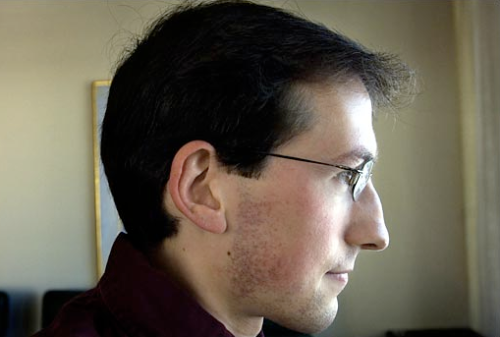 Success has a thousand fathers, as the saying goes. Social network Facebook is no exception. Aaron Greenspan, a college classmate of Facebook founder Mark Zuckerberg, has said he came up with the idea of of a college-focused social network before Zuckerberg did — and grabbed some attention as a result.

Now, he’s grabbing more attention. He’s trying to publish a book called AUTHORITAS: One Student’s Harvard Admissions and the Founding of the Facebook Era, that tells his side of the story.

However, Greenspan’s publisher (also his own company, apparently), called Think Computer, was denied the right to advertise the book because it used the “Facebook” name.

Now Think is petitioning the US patent office to cancel the Facebook trademark on three grounds: “priority of use, genericness, and fraud committed on the agency itself.”

This follows up on a lawsuit filed by another would-be Facebook cofounder, rival social network ConnectU, that is reportedly nearing settlement.

See the Think Computer press release, below, for more:

PALO ALTO, CA — April 15, 2008 — Think Computer Corporation today filed a Petition to Cancel with the United States Patent and Trademark Office regarding Facebook, Inc.’s registered trademark on the term “FACEBOOK,” after Think Press was denied the right to advertise its upcoming book, Authoritas: One Student’s Harvard Admissions and the Founding of the Facebook Era for trademark reasons.

Think began using the term “The Facebook” to describe one of the components of its houseSYSTEM student portal at Harvard University in the summer of 2003. It launched the feature on September 19, 2003, several months before thefacebook.com began accepting new users on February 4, 2004. thefacebook.com was later incorporated as Facebook, Inc. Think CEO Aaron Greenspan, who authored the book in question, was classmates with Facebook, Inc. CEO Mark Zuckerberg at Harvard when both sites were on-line.

Think’s petition asks the USPTO to cancel the Facebook, Inc. trademark on three grounds: priority of use, genericness, and fraud committed on the agency itself.

Think was founded in 1998 with the long-term goal of developing simple, useful computer software. From its inception through 2001, the company offered IT consulting services to over 150 clients. Today, it writes software programs that make businesses and organizations worldwide more productive. Think is on the web at http://www.thinkcomputer.com.

[Photo via The New York Times]