Some people may have soured on Anthem after last weekend’s delay-ridden demo of the sci-fi game from BioWare and Electronic Arts. That would be a mistake because Anthem’s extended previews were a lot more fun than the limited demo that most players got to see — if they got into the game.

BioWare and Electronic Arts had to issue a mea culpa for connection problems that players had, but the company said it had figured out some of the problems, which is good considering Anthem — the first new major intellectual property from EA in a decade — launches on February 22 on the PC, PlayStation 4, and Xbox One. Anthem’s open demo begins today.

Anthem takes place on a planet that was being crafted by the Shaper gods. The problem was that they left in the middle of it, and they left their tools behind. These tools were like a game development engine, like Unreal, used to craft the world as the gods liked. But the Anthem, as the tool of creation is called, spits out cataclysms and creatures at random intervals. 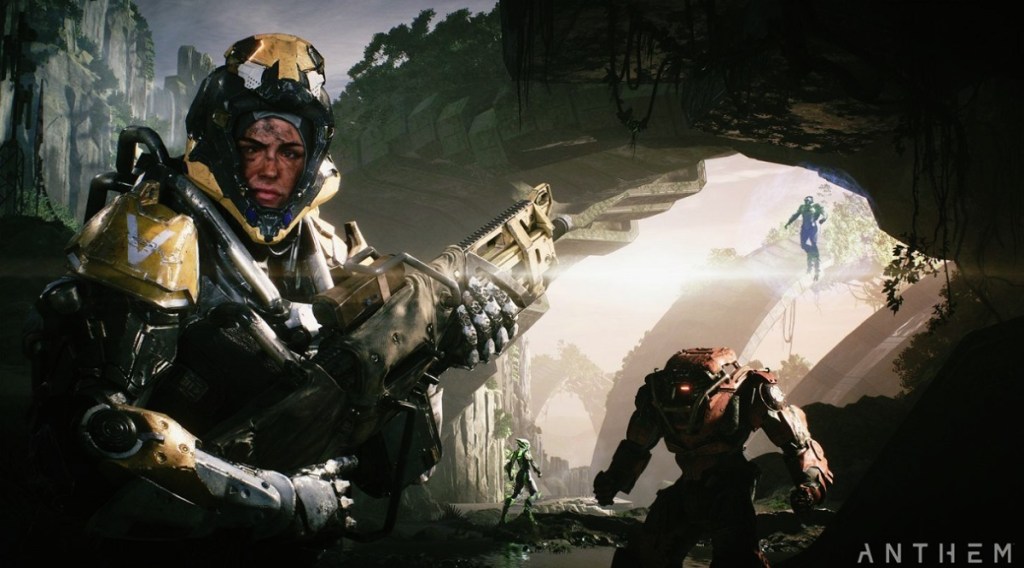 This makes life hard on the planet, and the human race has to cluster together in outposts to survive. As with Destiny (you knew that comparison was coming), some people serve as guardians, dubbed Freelancers. They fly out in Javelin exosuits (big Iron Man style flying mech suits) to explore and pacify the surrounding areas, which are filled with a variety of dangers.

When you leave the fort in groups of four, you can wear multiple kinds of Javelin suits. The Colossus is like a tank with heavy armor and weapons. Others are called Storm, Ranger, and Interceptor. As you salvage resources in the world, you can use them to craft new kinds of weapon attachments or weapons.

I’m looking back at the gameplay videos I captured during a recent press event at EA’s headquarters. The game will seem familiar to people because it has so many hints of Destiny, Halo, Mass Effect, Star Wars: Battlefront II, and a lot of other games where you collect loot and shoot. But when I said earlier that the action was satisfying, it was the endgame content in these new videos that I had in mind.

The videos below don’t reveal much of the story, as EA doesn’t want to spoil it yet for anyone. But you can see a lot of gameplay. I have edited videos for the following endgame missions:

Legendary Contract: Threat Assessment. This is a mission where you have to protect some cargo for the Sentinel faction, but a giant robot dubbed Escari has other plans in mind. It felt like it took forever to take down this boss.

Stronghold: Tyrant Mine. I didn’t get too far into this mission, but it was clear that it would be a lot easier with more co-op players helping me out. Still, I enjoyed trying to beat the enemies back and stay alive in this lush part of the map.

Stronghold: Temple of the Scar. I made my way to an underground cavern dubbed the Temple of the Scar. It was full of big rocks that made for good cover, but I saw tons of enemies throughout the levels. I made it through with one other player, who helped revive me when I was down.

Each one of these missions is a tough fight. But since your mech suit and abilities are also leveled up, you can take them on. If all of the endgame content is like this, I can see how EA and BioWare hope to keep players engaged long after the story campaign is over.

Certainly, these missions had a lot of bugs. Load times were long. The enemies would occasionally just sort of shut down and become sitting ducks. But hopefully EA is going to work that out by launch time.