Silicon Valley startup Anybots is entering the increasingly competitive field “telepresence robot” market today with the release of its first robot. Telepresence robots work as stand-ins for people who operate them remotely.

Cisco Systems’ TelePresence and HP’s Halo system, among others, already link two distant locations by a high-definition hookup with such sharp resolution that people on each end of the connection feel like they are in the same room. But telepresence robots go one step further: They can move out the conference room, down the hall, onto the factory floor, anywhere their motorized wheels can take them.

“It’s a solution to the problem of how to work more effectively in a globally distributed company,” said Trevor Blackwell, CEO and founder of the angel-funded Anybots, which today will begin taking preorders for the $15,000 robots (with a 10 percent down payment) for shipment this fall.

Unlike robots hovering over the busted oil well in the Gulf, disarming bombs in Afghanistan or treating a patient time zones away from the doctor — costing from tens or hundreds of thousands to millions of dollars — telepresence robots don’t have to be nearly as sophisticated. Their job is to enable one person to see and hear and interact with other people from miles away without the time and expense of travel.

While traditional video-conference systems also save the time and expense of travel, a telepresence robot enables a more interactive and productive meeting experience for people on both ends of the robot encounter.

“The power to be in two places at the same time is a powerful concept,” said Fred Nikgohar, founder and CEO of RoboDynamics, another robot maker, based in Santa Monica, Calif., that shipped its first model, called TiLR (pronounced “Tyler”), in 2008.

Like Blackwell, Nikgohar’s formative robot experience was repeated viewings of “Star Wars” and its “notion that humans and machines can live in harmony.” 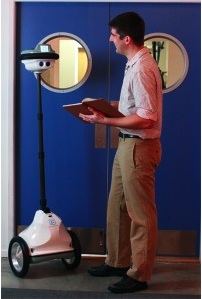 Meanwhile, Willow Garage of Menlo Park, Calif., is doing field tests of the Texai robot it is developing. With improvements in image resolution, video compression and falling prices, “everything is aligning” to spur telepresence robot sales, said Sanford Dickert, product director for the Texai.

At the Anybots lab in Mountain View, Calif., a row of robots sits silently waiting to be awakened and called to duty. Blackwell clicks a thumbnail image of one model on his laptop screen and then moves the robot forward, backward, left or right by pressing the arrow keys on the keyboard.

The Anybot leans forward and then its two wheels start rolling much like a Segway. The top speed is three miles an hour, and infrared radar prevents the robot from bumping into anything. The head, which sits atop a telescoping pole, has two “eyes,” one for capturing video and the other for a still camera. The operator can also use a laser pointer in the head to point things out. A speaker on the robot’s head lets the operator talk to people with the robot, while a mic picks up their comments back to him.

A rechargeable battery in the robot’s base powers the device for up to eight hours, the length of a typical workday, said Blackwell.

At just 35 pounds, the Anybot is portable, he said. The head, which extends up to 5 feet-9 inches, can be telescoped down so the robot can fit in a typical car seat. It can also be shipped to that factory in China, for instance, for less than it would cost to fly a person.

Hyoun Park, an analyst at Aberdeen Research and an expert in telepresence technology, is impressed with these robot launches. “This really starts bringing robotics more into human interaction,” said Park. “Whether it’s providing remote tours to new customers or providing managerial support for your own team in a remote location … these robots can provide a variety of different use cases.”

As robot prices fall, more businesses will find a use for them, said Blackwell, citing an example in retail where the maker of a clothing line can see the proposed display for her merchandise in a remote department store and can suggest changes. “As the cost goes down, the convenience goes up and that creates more applications,” he said.

Over time, people who have a telepresence robot in their midst think of the co-worker operating the robot remotely as working in their office, said Nikgohar, and converse with them more often than once every few weeks on a video conference.

“Two-thirds of conversations are started on the robot side,” he said, meaning that office workers seeing the robot roll down their aisle strike up conversations with it as though they’re talking directly to the operator miles away. “Those are conversations that would not have happened otherwise.”