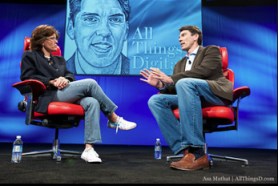 AOL is talking to more than two companies in a quest for a new search engine partnership, CEO and chairman Tim Armstrong told an audience at today’s D8 conference outside Los Angeles. Armstrong only name-checked Google, AOL’s current search provider.

The obvious other potential partner would be Microsoft, whose Bing search engine has a smaller but substantial market share compared to Google.

Search pundits are scratching their heads: Who else could there be?

John Battelle, editor of Searchblog and author of The Search, said there wasn’t really an obvious third candidate to deliver the breadth of content and volume of traffic that AOL would demand. “They may be looking offshore, beyond the U.S.,” he told VentureBeat in a phone call. “There are a couple of interesting technologies in Russia, and in China. But that’s just speculation.” Battelle believes Apple is building a search engine, but one geared toward finding iPad apps rather than Web pages. 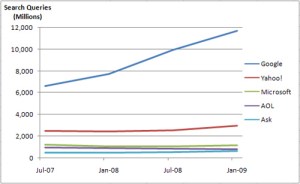 Armstrong’s comment underscores the extent to which the search engine market has shaken out. In America Google, Yahoo, Microsoft’s Bing, and Ask.com are the only major players left. AOL gets its results from Google. Yahoo has partnered with Microsoft to provide its search results and to serve all but Yahoo’s most premium ads along with them.

Ask uses a unique, question-oriented interface rather than looking up keywords as Google and Microsoft do. It seems unlikely AOL will switch to Ask’s model because of the major change it would pose to AOL users.

So, the sensible conclusion? Armstrong may be talking to other companies, but Microsoft is the only real threat to Google’s AOL deal.